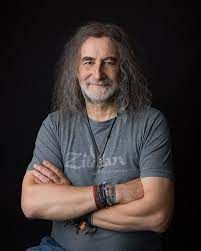 Rodney Matthews is a legend in the realm of rock and metal album covers. After many years working in advertising and designing book covers, he entered the music field in 1969. It was with the release of Nazareth's 1979 album 'No Mean City', however, that his career in heavy music illustration really took off. His best-known and most iconic covers include those for Magnum, Diamond Head, Scorpions, Praying Mantis, Asia, and Tygers of Pan Tang. Many of his works have also been published worldwide in books and as posters, calendars, postcards, T-shirts, and more. His originals have been exhibited throughout the UK and Europe, and comedian John Cleese is an avid collector of his work. Rodney is also an accomplished musician. We are therefore delighted to welcome Rodney in 2022 as he makes his inaugural appearance in the RAM Gallery.

Q. How did you first get interested in drawing?

“When I was a little kid, my dad was handy with a pencil, and when I must have been three or four years old, he came in from work in his overalls, took out his carpenter's pencil, and just spontaneously drew all these Disney characters all over the wallpaper. He was sober as a judge incidentally. I wasn't sure what my mother felt about it, but it was like a revelation to me. I started getting interested in Disney at that time and in copying the characters out of the early films, and that's how I got started. So, blame it all on my dad! And you can also blame a lot of other stuff on him because he was a drummer in a dance band and years later made the mistake of leaving his drums in the living room. Not only did he introduce me to art, he also introduced me to music. I got on his drum kit when I was about fifteen and thrashed about a bit. It all seemed to me quite obvious that music and art went together. When I was at art college, the kids used to bring their guitars in and play in the common room between lessons.”

Q. One of the recurring themes of the RAM Gallery exhibitions is the powerful symbiosis which often exists between rock and metal music and the accompanying album covers.

“Absolutely. I think one enhances the other, and they become inseparable eventually. Going back to the various things that led me down this path, when I was at art college, the tutor came in one day and gave us this hypothetical commission to design a record cover for Stravinsky's 'Firebrird', and I really got into it. I did a flaming bird going around in a circle. It was a great thing to be asked to do but I never thought I'd end up designing record covers because that's the sort of thing very few artists got to do in those days. And here I am now and I've done 143!”

Q. Did you have that common experience as a teenager of taking a new album home and then staring at the sleeve for hours while playing the album over and over again?

“Yeah! And in the early days one would roll one's spliff on the twelve-inch album cover, which made it even more interesting! Most people had photographs on their album covers in the early days. I was a big fan of The Shadows and The Ventures and all these instrumental bands, but as it went on you got things like King Crimson and Yes and all the prog stuff, with album covers that had a very creative essence to them.”

Q. The early metal bands such as Black Sabbath and Judas Priest displayed quite a progressive edge on their first few albums in particular.

“That's right. I came along at just the right time, but my style changed a bit because I worked for about eight years at an advertising agency, and I had to work in various styles. So when I left in 1970, I had a load of different styles to choose from, and it was really a matter of one cancelling out everything else – this sort of nature-based, spiky stuff which was actually taken up more by the early metal bands than by prog. I obviously came along at a time when it was acceptable to illustrate bizarre things which were fantasy and science fiction based. That's the thing people latched on to. Before that, my first paid record cover commission was Thin Lizzy, an EP called 'New Day'. That was painted on canvas in a style rather like I was called upon to do in the advertising agency. But I realised people were liking this other stuff I'd done, like the Michael Moorcock book covers.

Q. How did you finally break into the rock and metal genres?

“I put out a calender in 1978 and it was seen by Nazareth who were in Zurich mixing their album 'No Mean City'. They were stuck for a cover and someone said 'What about this bloke?' So I got commissioned to do that job and I think that's what really set the ball rolling for all my metal-based album covers.”

Q. What is the balance between bands approaching you with well-defined ideas of their own versus them asking you to come up with the cover yourself?

“It's about 70 per cent the latter, people knowing what I do, coming to me with basically what the album's about, but without any specific instructions. The other side of it is when you get given a very tight brief. Working for Magnum, Tony Clarkin comes along with a well-defined idea of what he wants. Apart from the first album I did which was 'Chase the Dragon', which was all my own concept, everything else has been his idea. It's like the typical scribbler on a beermat thing! He does actually turn up with a scruffy bit of paper. Everything but the kitchen sink usually goes in it, ha ha!”

Q. Your style seems unmistakeable, but were there artists who influenced the development of that style?

“I actually admired children's book illustrators like Arthur Rackham, but I have to admit that Roger Dean did influence me in the early days, and he's never allowed me to forget it, ha ha! With all those Yes covers and all the other stuff he did. I thought it was a refreshing change from the stuff that went before, but I had to make a deliberate decision to not allow myself too much of an influence there. He didn't like it very much to be honest because we were published by the same company for posters, selling quite a lot in those days, in the '70s. He was first to work with the company and then I came along afterwards and it pissed him off a tad. Obviously Frank Frazetta was a big influence, and strangely enough Ralph McQuarrie who did the original Star Wars drawings. Any artist or musician who claims to be utterly original is probably simply not aware that they have been influenced by other people.”