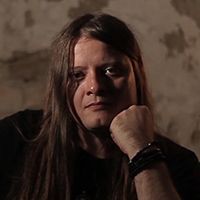 Making his RAM Gallery debut in 2019, we are pleased to welcome Peter Sallai of Mortpaint Graphics. Peter is a Hungarian artist who has worked with many bands including the likes of WASP, Kataklysm, Korpiklaani, Crematory, Annihilator, Tyr, Mayhem, Powerwolf, Satyricon, Kreator and, most notably, Sabaton. Peter is also a member of black metal band Bornholm.

Q. How did you get started in both metal music and art?

“Back in my teenage years when I was in high school, around 1994, I started listening to rock music and it changed my whole life. Then I started at college studying visual arts. I wanted to contact two things – music and art. After I finished my exams and started work I tried to design some album covers, at first for local bands, but later, I don't know how, when I moved to Budapest it became my full time job. Designing album covers for Hungarian bands but also of course, worldwide.”

Q. What was your first album cover job and the first that you really felt was significant?

“Maybe it was a Hungarian band called green Division, the first official one. The first big job I think was maybe a Kreator t-shirt, or something for Annihilator, I don't remember clearly, but it was some merchandise. The first bigger album cover was maybe Memory Garden.”

Q. Sabaton is the band you've done the most high-profile work for – how did your relationship with them begin?

“It's a strange story. I met them for the first time in 2007. They weren't such a big band back then. We played together in Transylvania at a festival. We said hello after the show, nothing more, but after two years or something I got an email from them. They were looking for somebody to design their merchandise and that's where the whole thing started. The 'Primo Victoria' t-shirt was my first job for them and a lot of other things followed.”

Q. How does the creative process for an album cover usually work?

“Often bands give me the album title and a small brief. The music is mostly secret before it's released, so I almost never get to listen to any. But they'll tell me the general direction they want to go, and Sabaton is one of the bands who totally trust me to do what I want. It's so good for me and it's so rare because most of the bands have specific ideas of their own.”

“I work mostly digital but I like painting analogue, on canvas. But I don't have enough space to do it. That's why now I am working fully digitally. It's faster and it's easier to fix things or change things.”

Q. Most people would never guess that your work is completely digital.

“The reason is the software. Nowadays we have amazing software. Fifteen years ago there was only some photo-montage stuff and you couldn't paint like in reality with a paintbrush. It's so much better and so much closer to real life now.”

Q. Do you ever have time to create artwork purely for yourself?

“I would like to but I don't have much time. I have tons of work but sometimes I do something for myself, but not so often because of work. It's so strange. When I started I would draw what was in my mind for my own pleasure, but now I make almost everything for someone else.”

Q. What do you feel makes a great album cover?

“If it's just an illustration of the music I think it's kinda boring. If you look back in time, for example, Judas Priest covers, they were a piece of art. It's an artist's work and an artist's world and not a musician's world. So it was the artist's job to do the album cover and sometimes it was just a picture, an iconic picture. Led Zeppelin covers, Deep Purple covers... it was not just an illustration of the music. It was almost a separate thing. It's good when there's contact between them but I like better that it stands on its own.”

Q. What's the first album cover that you remember seeing?

“The first cover I saw in my life I remember clearly and it was Iron Maiden's 'Somewhere in Time'. It was on a postcard which I still have today. I was only a little child when I got it. I was so amazed! What could it be? After I saw the 'Seventh Son of a Seventh Son' album design I was hooked on Iron Maiden.”

Q. What do you feel is your best work so far?

“People always say it's the last one but I think 'The Great War' by Sabaton. It's the biggest work in my life and I think it's the best.”