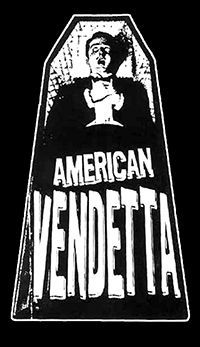 Hailing from Orange County, California, Christian Sloan Hall has created some of the most vibrant and distinctive rock and metal artwork of recent years, working with a host of bands including Amon Amarth, Byfrost, and Kvelertak, and publications such as Metal Hammer.

Q. Following a long period of shrinking budgets and disappearing packaging due to the digital music revolution, do you sense a resurgence in interest in album artwork both as an integral part of an overall creative vision, and even in its own right?

“There definitely is a resurgence. That's the best word for it I'd say. I think people maybe forgot for a while and were super-stoked on shitty Photoshop covers. They must have been because, damn, it was hard to get a job for a while. I had to convince people to give me a chance and I got paid really shit wages for a while. It wasn't only Photoshop; there are so many artists out there who are willing to work for free to get their name out there. I totally understand the whole struggle to get your shit out there, but I would never not take money for it. It just seems insulting in a way.”

Q. How did you get started in art?

“My first real professional job when I was fifteen was doing graphics for a local surf company around here. The subject was actually Irish mythology and it was the death of Cú Chulainn. I've always been into that stuff and drew a picture of it anyway and this pro surfer guy – also called Christian – freaked out and the next thing I knew I was working for his company. I then moved up to San Francisco because I got a scholarship to go to the art college up there. I had been playing music in local bands since I was fifteen, and then I got involved in the music scene up there. But I couldn't really manage to do both, the music and the art, so I had to make a choice. I went with what I thought I'd probably have a better chance of success with. I grew up loving heavy metal artwork - Derek Riggs and Iron Maiden and all that - and I wanted to get involved in the music business with my art. I figured I could be part of music and still do what I loved. My buddy Al and I started doing gig posters to advertise the metal shows that were coming up because we knew the promoter. We'd silk screen, like, 200 posters by hand and show up down at the gig. The band would either love it or kick us out, which only happened once. I'd usually give the band a bunch of these posters and then they'd usually get hold of me to do artwork. They were like giant business cards. It was really that easy, although getting into the shows and sneaking back stage, I'd have to do some Jedi mind trick stuff. And screen printing those posters was a bitch. We definitely paid our dues there, man.”

Q. One of the most powerful synergies comes when a band and an artist manage to work together for years to build a relationship and create an entire world around the music. Metal seems to be where this happens most often.

“Maiden is the ultimate example of that. Derek Riggs' work is the best identity packaging for a band I've ever seen.”

Q. You've worked with Amon Amarth for a while. Perhaps the ultimate expression of your collaboration was the stage backdrop they created using your artwork.

“I'm a huge history nerd and I love Viking stuff, so it's the perfect job for me. It was pretty mind blowing when I first saw it. There was pyro going on and columns of fire and you had the dudes doing the unified head-spin in front of it... it was just the best art show a guy could ever ask for! The guys have really gotten a lot of use out of it so a lot of people have seen it.”

“How the artwork suits the subject matter is a huge part of it. The artwork could even be shitty if it represented the right kind of vibe that the band was trying to exude. If Mayhem came out with an album cover that was just black, I'd think that was kinda funny.”

Q. With increasing use of technology, have your art techniques or materials changed over the years?

“A lot of it has to do with my galavanting around, so I've had to figure out ways to work on the road, basically. And Photoshop is the main industry standard now. That or Illustrator. So even if I did actually take the time to paint in oils like I would love to do, it was cost me so much money just to get the thing scanned, and it would end up in Photoshop anyway. But the basic way I do things hasn't changed, I just arrange them in Photoshop. Just like comic books, I'll sketch it out, then ink it with a brush, and then scan it in and move shit around. I've always been interested in air-brushing and I got the idea from those street dudes doing graffiti with spray cans, to scan some spray paint and some splashes and different textures like that. So basically everything I'm using is actual paint and I try to keep as little computer involvement as I can.”