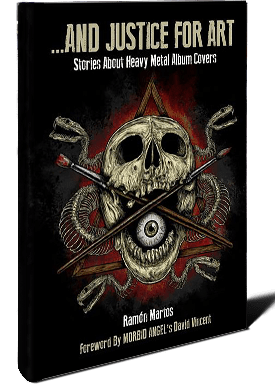 Q. You’re staging a launch for your book ‘And Justice for Art’ in the gallery at Bloodstock 2015 – how did this come about?

“This was an unexpected surprise. I’ve known Paul Gregory for some years now. He’s in my humble opinion, a master painter and illustrator. Through the years, I’ve interviewed Paul for the ‘And Justice for Art’ book because some of his artworks are featured in it. During one of our email exchanges Paul asked if I would be interested in presenting the book as part of the festival’s Rock and Metal Gallery. Of course I said yes right away! After all, the gallery is a one of a kind exhibit that promotes many kinds of art. So, it’s a perfect opportunity to expose a book like this that deals with the subject of metal album covers from the early days of the genre to 2014. I feel extremely honored to be able to exhibit the book at this year’s Bloodstock gallery.”

Q. How did you get the idea for the book?

“I’ve been a passionate fan of metal music and visual arts for more than 20 years. In fact, I’m a professional musician and also have a degree in visual arts. So, it felt natural to me to bring together both passions for the ‘And Justice for Art’ project. It first started as a monthly online series and as a Facebook community and eventually, became a proper book. However, the origins of this book date from the late ‘80s/early ‘90s when I was growing up in Cuba as a rabid metalhead. At that time, my friends and I didn't have access to record stores, magazines, etc. We listened to music mostly from third generation tapes that usually had extremely bad quality and zero references to the original artworks. After I moved to the USA, I finally had the opportunity to discover how all those album covers looked like. It opened a whole new visual world for me. However, it surprised me that there wasn’t a lot of information about them. It was mind blowing! Millions of fans had the albums and merchandise featuring the artworks and didn’t know much about it. I believe all these pieces of art deserved better. That’s why I first created the ‘And Justice for Art’ online series and the Facebook community, to pay proper tribute to the artworks and the artists. Eventually, it became clear to me that a book was the ideal vehicle to tell the stories behind the making of these artworks. That’s why the name of the book is ‘And Justice for Art’ because this is a document to help rescue all these stories from potential oblivion and to recognize the work of the artists.”

Q. How was the process of putting it together?

“It was basically me doing everything from the very beginning. I did everything from researching to writing, designing, promoting and now selling/shipping the book. More than three years passed from the moment I started to do the research until the moment I got the finished book in my hands. Considering that this is a one man project and that this book spans more than 40 years of metal visual history, I think it’s a sort of miracle that I was able to finish it. I faced many obstacles and limitations both logistic and economic. But in the end, I made it happen.”

Q. How do you view the synergy between art and music, in particular heavy metal in all its many forms?

“The first chapter of the book actually tackles that. I interviewed artists, bands, and even a psychologist about it. For me the right symbiosis between music/lyrics/visuals is what can make an album really successful and create a long-lasting impression in the listener. In my opinion, the album cover and the packaging in general give another dimension to the music/lyrics and dramatically enrich the listener’s experience. It definitely helps you to establish a deeper connection with the band/artist and helps to understand and differentiate every album as a distinctive musical/visual journey.”

Q. The role of record sleeves has clearly evolved over the decades, especially in metal. What’s your view on how things have changed and do you think artwork has begun to re-emerge as a key component of music packaging?

“I like the fact that artworks are more avant-garde and adventurous these days. I like the fact that some of them are not so genre specific anymore. For example, nowadays it’s easy to find a death metal album adorned with an abstract painting. That didn’t happen so often before and I think that showcases a clear aesthetic evolution. Regarding the status of music packaging, as a faithful fan of the physical media, I never felt that the physical format was leaving the game 100% or really needed to re-emerge. Of course I have noticed that many record stores are closing and that the MP3 and digital piracy has been rampant over the last decade. But that never affected my relationship with the physical format. For me and for many old-school fans the artwork has always been important. The digital revolution has radically changed the importance of the physical media and the artwork by extension. However, the faceless MP3 has also given bands, labels and designers the opportunity to expand the possibilities of artwork and packaging in order to give competiveness to their products. That's why nowadays special editions and box sets seem to be more popular and inventive than ever before, especially in heavy music. In my opinion, the physical media will survive one way or another, for many years. I believe that all formats can co-exist and even help each other to obtain mutual benefits.”

Q. What sort of feedback have you had on the book so far?

“Most people like it a lot, so far. I never expected such a positive embrace for most of the readers and specialized press. There have also been some constructive criticism from a few fans and they’ve been very helpful. Of course, it’s not a perfect book (there’s no such thing) and there’s room to improve. But in general, I’m satisfied with the outcome and most people are very happy with it. That’s my reward!”

Q. Have you visited Bloodstock before and if so, how did you find the event compared to other festivals you’ve been to?

“In previous years, I have written many articles about it and helped with the promotion. But I’ve never been there. So, I’m really looking forward to this, especially because the book will be part of it as an exhibition piece. That’s totally mind-blowing and again, I feel utterly honored about it. It’s good to clarify that the book will be there for exhibition purposes only. To buy a copy of the limited edition while supplies last, people can visit the official webstore at: http://andjusticeforart.bigcartel.com/product/and-...

Q. Paul has great ambitions for the RAM gallery as a concept, bringing metal music together with other related forms of artistic expression. Do you think that maybe creative connections and opportunities for artists from different disciplines but with much in common to work together are sometimes overlooked?

“What Paul is trying to do with the RAM Gallery is nothing short of amazing and to certain extent, really revolutionary. Most of the metal events out there don’t give too much space to other artistic disciplines and I think Paul knows this and wants to change it. That’s why he has created a space for artists from different backgrounds to present their work, interact and possibly even start some kind of collaboration. Hopefully, the gallery will keep growing and will become a sort of artistic epicenter in the years to come. I think the world of metal and art needs more of that.”