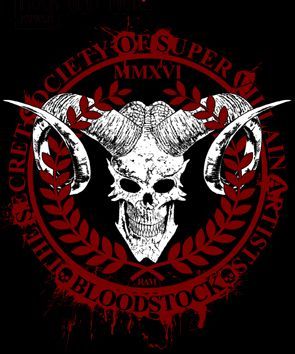 The Secret Society of Super Villain Artists is an international collective of artists who emphasize comradeship, community, and networking independent of the mainstream art establishment. Although often associated with urban art and subversive, guerilla tactics, their members come from a wide variety of artistic backgrounds and almost all walks of life. In 2016, they'll be bringing their very particular brand of anarchic artistry to Bloodstock for the first time. We hear from founder Silent Bill who confesses that they're not really secret, not actually supervillains, and some of them aren't even artists.

“I was into metal but didn't dress metal so I couldn't hang around with the moshers. I lived on a council estate but I read books, so I didn't want to hang around with car robbers but at the same time the academics and intellectuals, I couldn't hang around with them. I found the same thing in the art scene when I first got involved – it was very cliquey. My art was too low brow – juvenile humour stuff like making Wanker Bars instead of Wonka Bars. So it was all just a joke but I put with it 'Coming soon!' and it drew quite a bit of interest. So I made an application form and put the return address as The Tate Gallery in London, and people actually started filling out the form and sending them to The Tate. We got in trouble with them who told people 'Please don't send these in, we're not associated with any society!' They emailed me something along the lines of 'We've got a couple of hundred applications here so stop asking them to be sent to us. Where would you like these to be sent?' So I emailed back and said 'That's Brilliant! Can you send them here?' and gave their own address to them, just to wind them up. Eventually, the applications started coming to me and some of them were brilliant and people had done really nice artwork. So I set up a website and started posting the applications. Then it started to snowball and what I realised was that people were starting to come together via it, saying 'Are you in the society? I'm in the society!' By the time I had a couple of hundred people I started to think that I could do some good with it.”

Q. Besides promoting the work of so many artists – particularly up and coming talent – much of the work you've done has involved helping charities.

“There was a charity thing that I asked people to donate artwork towards and we ended up making a couple of thousand pounds. So we started auctioning off people's work and donating to more charities. People say they'll donate twenty per cent or whatever and then we ask the members where we should put it. Like at Christmas when we did a toy appeal and distributed them. We've also had instances where members will just go out on the street with sandwiches and feed the homeless. Then they post a photo on Facebook and – as we have a big clan - maybe a couple of hundred people will go out and do something like that too.”

Q. There's a definite anarchist streak running throughout all this with no leader, no rules as such, more a code of behaviour or ethics, where members know what's wrong and right. Most people don't actually need to be told what stepping out of line looks like.

“They say I'm the founder or the leader, but it's not mine, it's ours, it's everybody's. We don't want to condone vandalism or wrongdoing, we want it to be a positive movement, and that's what I'm finding. Someone could ruin it for us very easily. All it would take is for one idiot to go and destroy a valuable piece, run into a museum and write on it, and we're destroyed too. We've only ever had to ostracise one person who overstepped the mark and that was the punishment – you're ostracised.”

Q. Despite being beyond the mainstream, you have staged several formal exhibitions, and have members working within the Fine Art tradition, some of whom are actually quite well known.

“We had our first exhibit in Spain in a gallery one of the members had. When I was flying out to it I actually missed the flight and was a day late. That added to the myth – 'He couldn't even make it to his own exhibition!' After Spain, we had them in London, Liverpool, Australia and Miami, plus loads of people doing their own little things. A lot of the fine artists tend to want the creativity and the outlet and all that but not the anarchic stuff. We're seen as a big party group and it's all fun, but some of them depend on us for a living. There's a lot of different groups within the Society and a lot of the biggest and best artists – some of them are in The National Gallery and stuff - you won't see on the site, and they don't have to be because they don't have to shout about it, even if they love the ethos of what we do. It tends to be the up and coming ones who wanna make a name for themselves.”

Q. What kind of activities do TSSOSVA have planned for Bloodstock?

“What we're doing for Bloodstock is a concept called Free Art Friday which involves collecting a body of people's work and quite literally leaving it somewhere with a little thing on it saying 'I'm free, take me if you want me.' On the back will be the artist's details and people can contact them and say what they thought of it. One, it's promotion for the artists and two, galleries are difficult to get into. The guy who originally did it was leaving tin cans with faces painted on them and people found them like little gifts. Now some of them sell for £500. At first I couldn't get my head around why I'd leave a piece of my art on the street that I could sell for fifty or sixty quid, but then I got it. London's actually full of it – you can't walk twenty yards in Brick Lane without finding a piece. A lot of people aren't aware of it, and a lot of people are apprehensive about picking them up at first. The One Show TV show did a special on it once and an artist did the drop and timed how long it took people to take it. On average, stuff was staying there eighteen to thirty minutes, even though lots of people passed it and obviously wanted it. So, throughout the whole weekend, that's what we're gonna be doing at Bloodstock.”