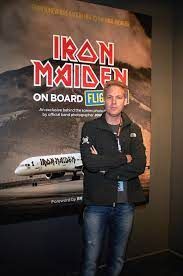 John McMurtrie is an award-winning music photographer best known for his live and studio work with rock and metal bands. He is the official photographer for Iron Maiden and author of the book 'Iron Maiden: On Board Flight 666', a behind-the-scenes photo documentary. 2021 marks his debut in the RAM Gallery which will be showcasing a series of his classic shots.

Q. How did you get into photography in the first place?

“I was in a band and at art school. In the town where I grew up, there was just loads of bands, everybody was in a band, and everybody needed pictures. I was kinda just the guy with the camera so I would take photos using really crude methods like using car headlights and stuff, but they were quite quirky, and that's what got me into it, really. Years ago a lecturer who was teaching photography said to me 'If you want to do this as a profession, specialise, find something within your world that you love and obviously I love heavy metal ha ha! I played guitar in a thrash band so I just combined the things together. I still pinch myself now that I can make a living going on tour with the bands I love and doing something that I really enjoy.”

Q. So much has changed since you started in the late '80s. Good quality cameras have gone from something exclusive and expensive to something most people have in their pocket in the form of a smartphone.

“I got into the game when it was kind of the grunge era and then into the nu metal era and to get a photo pass was such a privilege. Cameras were confiscated at the door and they were hugely strict on it. So it made it really matter and it is quite strange now when you have 20,000 people holding their camera phones up. But thankfully, especially with Iron Maiden who I tour with, the photos I give them are hugely different to what you can get on an iPhone. I've never seen it as a threat, I really haven't, but it does make me chuckle that we used to jump through so many hoops to be able to get a camera into a concert. Now you can just walk in with your phone and film the whole concert if you want to and a lot of people do do that.”

Q. Have you ever shot a relatively unknown band who went on to become huge?

“Yes! And I think that's one of the most rewarding things in this job to be honest with you. Korn was one of the big ones. I did a few dates with Korn in the UK around '96/'97. We hung out with them before they went on stage and to me they were just a load of California bums, nice guys you would want to hang around with, but nothing particularly special. But when they hit the stage they just blew my mind, and I remember telling everyone I knew about this new band Korn, because it was just phenomenal. They were tiny little club shows and it was absolutely amazing. Slipknot I did back in about 2002 on the Tattoo the Earth tour and I remember them coming on stage and thinking who the hell is this? But then it was absolutely phenomenal. Another one was Limp Bizkit. When they first dropped it was just incredible. We toured with them in America for two or three weeks and every night they just blew the lid off places. And then by the end of the tour they were playing huge outside arenas and stadiums. It was amazing, and that was before they hit in the UK. Whatever you think of them now, they were the right sound in that era. But I love that. Going to shoot a band and you don't know who they are and you just get blown away and think this is it, this is the next big thing. And it constantly happens. I know everybody moans and says that they are no big AC/DCs or Metallicas or Iron Maidens any more, but there really is. Bands like Bleed From Within, all making traction in the metal world, and I think some of them will seriously be as big as the big bands now. Look at Slipknot. Nobody gave them more than two years. They said it was just a flash in the pan thing.”

Q. You started out doing shoots with bands in studios and on location. When did you move into shooting live shows?

“Yeah, I was doing band photo shoots first and then I started wanting to go and shoot gigs. I remember all my friends were going to see Ozzy and I couldn't get tickets. I don't know where I got the idea and even now I think I'd never try this today. I called up the record label and said I was with Rock Journal magazine and I needed a photo pass for Ozzy at Hammersmith Odeon this Friday. It was a really quick response from the press officer who just gave me a fax number and said 'Fax in your request' and put the phone down. So I sent it on fake headed notepaper for 'Rock Journal', which didn't even exist, and within ten seconds a fax came back telling where to pick up my photo pass at the stage door and what time. It was that easy. All of a sudden I was in the photo pit in front of Ozzy Osbourne and Zakk Wylde – this was 1988 or '89 – and it was just the most amazing experience of my life. I got some great photos and after that I thought 'This is it! I'm going to be a music photographer!' I sold those pictures to various magazines and I made more money than I ever made in my life and it was like, wow! If I actually concentrate and learn the game, I can get a business out of this. So I started shooting every band going and spent about four or five years building up a portfolio.”

Q. Becoming the official photographer for Iron Maiden must surely be a career highlight?

“It's an absolute dream to be honest. As a photographer, who wouldn't want to be the tour photographer for a band whose lead singer is the pilot of a 747? And you're gonna tour all these crazy places around the world? It's a dream gig. But even before I was working for them, I got commissioned to shoot them quite a few times for Metal Hammer, and once I flew out to Frankfurt, got there really late, had to set up a studio backstage, and I remember the management said 'You're all good, sit down, we're gonna get you a burger and a beer' and they just totally looked after me. They know how to make people feel good, and it was brilliant. So when they asked if I was interested in doing some more stuff with them, it was like, absolutely! It's a real honour to work for Iron Maiden.”