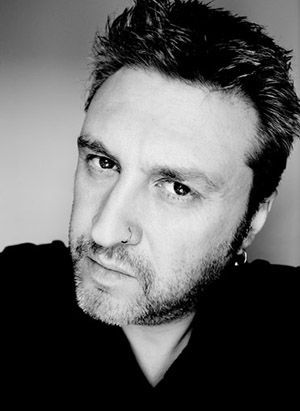 Paul Harries is a renowned British photographer best known for his work with rock and metal bands. Over the course of more than two decades, he has amassed a portfolio to rival the best snappers in the business. He has risen to become leading lensman for Kerrang! magazine and shot luminaries such as Nirvana, Green Day, Metallica, AC/DC, Ozzy Osbourne, and Slipknot. Paul made his RAM Gallery debut in 2017 and a selection of his work will once again form part of this year's exhibition.

Q. It's been a year since your inaugural appearance at the RAM Gallery – what's been new for you during the last twelve months?

“The major change in the last year is that I've started working for Music Week magazine which has put me in front of a lot of artists that I wouldn't normally shoot, like Michael Ball and Alfie Boe, [rapper] Tinie Tempah, and [The Smiths guitarist] Johnny Marr, people completely outside the rock genre. Very different from working at Kerrang!. Michael Ball and Alfie Boe were probably more rock'n'roll than anyone I've worked with in the rock'n'roll business ha ha! It's been pretty interesting but how interesting to a Bloodstock audience, I don't know!”

Q. Any highlights within the rock and metal field?

“I shot Metallica last year for a magazine cover and one of those will be in the exhibition this year. It's always cool working face to face with Metallica.”

Q. What were your impressions of last year's exhibition?

Q. What work will you be showing this year?

“Well, I had six pictures up last year and I'll have nine this year. There's a couple of pictures of Slipknot – one of Corey Taylor from 2012, which is quite nice, looking quite creepy in his red boiler suit and the mask he had at the time. Then there's one of Chris Fehn and Kerry King together. It's quite a funny shot of Kerry shouting at Chris. There's a picture of Rob Zombie which I took in 2011, I think, and that was backstage at Brixton Academy and he had on a big Union Jack coat that he had made for the British shows. It was just taken in a dressing room but my friend Steve Horsfall, who's a digital artist, has put that shot into an environment where it's sort of overlooking London. There's a very atmospheric sky in the background and you can see the London Eye and the river. That's a bit of a collaboration and I do quite a lot of work with Steve, but I just thought this particular shot would be good for Bloodstock.”

Q. Have you shot any of this year's Bloodstock headliners?

“I've shot all of them! I first shot Gojira when they first came over to the UK way back and I've shot them quite a few times since. There's actually a picture of Gojira I took in this year's exhibition. I've also shot Nightwish quite a few times. I've shot them back when Tarja was in the band – 2005 I suppose was the first time – and obviously they've been through a few singers since then. I also shot them recently in Tallinn in Estonia. I'd never been there before so we went out to see them live and shoot the new show, which is amazing. Lots of fire, which was cool. And I did some portraits of them as well. As for Priest, Rob [Halford] is a really, really lovely guy, really easy to work with. I've done a few shoots with Rob on his own, I've shot Priest live quite a few times as well, and there's a live shot of them in the exhibition.”

Q. You and one of your fellow exhibitors for 2018 – Stephen 'Krusher' Joule – go back a long way I believe.

“Yeah, I used to work with Krusher when he was at Kerrang!. He used to call me 'dream boy' ha ha! He had a packet of 'love heart' sweets. He gave me one and said 'Let's see what it says!' and it said 'dream boy' and he's called me that ever since! Even if I contact him now I'll always say it's dream boy.”