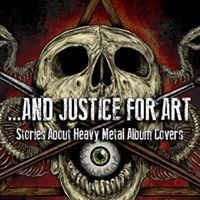 Ramon Martos is the creative mastermind behind the book 'And Justice for Art - Stories About Heavy Metal Album Covers', a unique collection of revealing tales about the making of some of the most iconic album covers in the history of heavy metal. Lavishly illustrated and produced to the highest standards, the book had its UK launch at Bloodstock in 2015. With the first two editions sold out and a third, revised and updated version due imminently, 'And Justice for Art' returns to Bloodstock in 2016.

Q. It's been some time since the publication of your book ‘And Justice for Art’ and a year since its launch in the gallery at Bloodstock 2015 – how has the response been?

“The response from the fans has been mind blowing! Most people have truly become in love with the book and its unique content and have praised its visual quality, especially because it's been independently produced, without the help of a big publisher. I believe the biggest proof of this success is that our online community (https://www.facebook.com/andjusticeforart/) tripled its membership since the book came out. We were also surprised with the sales and requests from all around the world. The first two editions became sold out in a few months and the demand continued. That's why we decided to do something especial for the release of the third print - a revised/updated edition. The press reaction has been pretty favourable, too. Publications as important as Billboard, Decibel, Zero Tolerance, and others praised the book beyond our wildest expectations. Bands totally love it as well. Some of them even took photos with their copies and shared it in their social media, which has been tremendous exposure. Some bands even offered support for any future books. I cannot be happier about the outcome!”

Q. Last year we noted an increased interest in and value placed on album art – real, crafted, quality covers that are artworks in their own right. In your view, has this trend continued?

“Definitely, the interest has increased toward album art and the physical media, especially if compared to previous years. The proof is in the sales. However, I believe there has always been a niche market for this. There are people that, for different reasons, have always appreciated music related visuals. They have always recognized the importance of images and how they enhance the listening experience, the sounds, lyrics and the particular universe of a recording. It’s great that more people in younger generations are developing a new level of appreciation for music’s accompanying imagery.”

Q. You're launching a revised edition of the book – what updates and / or changes have you made?

“There are many, many changes, some of them more significant than others, but equally important. Although the new book has the same amount of pages and similar layout, I added a few new images that weren’t available at the time I published the first edition, or exchanged some artworks for similar ones with much better quality. Some parts of the text have also changed, in some cases dramatically. It’s not something you will notice at first sight, but once you go deeper, there are things that are unequivocally different. There are also new comments or interviews with bands and artists I interviewed after the first edition came out. Also, the colour reproduction is richer and closer to how the original artworks look like. It took a lot of time and effort to get it to where it is today. That doesn’t mean you have to buy this new revised edition if you already have a copy and you are satisfied with it. But this one is definitely much better and closer to what I originally envisioned. It’s not perfect, but what’s perfect in this world? I just can say that I’m super pleased with the finished product and people will be too.”

Q. Appreciating Motörhead artwork is made all the more poignant with Lemmy's passing...

“I’ve always been a huge admirer of Motörhead and their visual legacy. It’s incredible what they and their graphic artists have done with the band’s mascot Snaggletooth through the years. I believe it is an iconic, brilliant creation and in some ways, its many mutations have proven to be, in some cases, more interesting and menacing than Iron Maiden’s Eddie. I know that some people won’t agree, but Snaggletooth rarely felt caricature-like. It always felt vicious even if most of the times didn’t have a fully-developed body. There’s ferociousness and a swagger to it that went hand-in-hand with the rebellious image and attitude of Lemmy and the band. Even the Motörhead albums that didn’t feature their mascot, like for example 'Ace of Spades', have properly represented their essence and attitude as one of rock/metal's wildest collectives.”

Q. In a way, your book now also forms part of the wider tribute to Lemmy at this year's Bloodstock.

“'And Justice for Art' features a whole chapter about Motörhead’s artwork and the development of Snaggletooth as one of metal’s most recognizable icons. For me it was impossible to write a book about hard rock and heavy metal imagery and not include Motörhead’s visual lore. It has to be part of it, period. Now, with the book coming back to Bloodstock this year and having the opportunity to share it with more people and becoming part of the amazing tribute the festival is preparing for Lemmy and the band, simply feels like coming full circle. It’s a huge honour, indeed.”

Q. You spoke about your wish to see this become a series of books. What plans or progress have you managed in making this happen?

“Well, more than a wish or an idea, it’s little by little becoming a reality. I’m currently working on the second part of the book, to be titled 'And Justice for Art – Vol. 2'. I have more material than when I did the first book. It will feature equally iconic metal album covers and their incredible stories. In fact, I can say that there are bands already confirmed that I wanted to be part of the first book but for some reason or another wasn’t possible. There will be a lot of variety in styles, metal genres, ete. But it’s a very painstaking process and it will take some time to put the whole book together. Hopefully it will be ready for next year for Bloodstock 2017! In addition, there are plans to bring the brand 'And Justice for Art' to a wider audience. We’re planning a regular presence in magazines, websites, and even there are talks about a potential video series. But all that takes time and effort and my main focus is the second book and the current revised edition. Let’s see how everything goes…”

Q. You mentioned writing about Bloodstock in the past – are you any closer to being able to come over and visit the festival?

“It’s been unfortunate I haven’t been able to go to Bloodstock, especially the last couple of years. Last year, there were some financial setbacks that didn’t allow me to go to represent the book at the festival’s RAMM gallery. This year, I have some problems with a fracture and schedule conflicts that prevent me again from assisting. Main organizer and dear friend Paul Gregory and I have been talking and doing serious planning to make it happen next year for sure. After all, the third is the charm!”