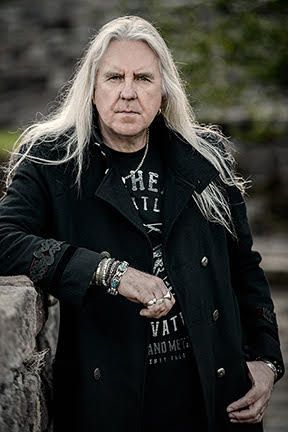 Bloodstock Festival and RAM founder Paul Raymond Gregory shares a long history with Saxon. The British metal stalwarts enjoyed a rapid rise to success in the early '80s with hit albums and singles both at home and abroad. Following something of a departure from their signature artwork style with 1983 album 'Power & The Glory', the band returned to a more traditional look for the follow-up, 1984's 'Crusader'. 'Crusader' became the first of many album covers Paul subsequently created for Saxon, and over the years he and frontman Biff Byford have forged a strong creative bond. As the band gear up for the next leg of their 40th Anniversary 'Castles and Eagles' world tour, we spoke with Biff about the jaunt and working with Paul.

Q. Where did the idea for the latest live album originate?

“For 'The Eagle Has Landed 40' album, we started with an idea from the fact that we record a lot of concerts, which you can do now with digital mixing desks. If I want to, I just say to the sound guy 'Let's record tonight'. It just gets put away in the archives. Between us and management and the record company, we thought we could release an album which covered from the old days till now and featured this band, the band that's together now. It's our 40th, so we selected 40 tracks. From that it was brainstorming by all the key players in the Saxon camp. I wanted to go out with a stage set – Castles and Eagles – that took elements from both the 'Denim and Leather' tour and the 'Crusader' tour and put the two together. It's been a great production, taken together with the album.”

Q. The stage set for the current tour is awesome and incorporates elements similar to the original 'Crusader' tour stage set which you worked on with Paul.

“Yeah, the new castle stage set is modelled on the old one which Paul designed. I wanted there to be some hand built elements, like the old days, and some digital elements, mixing the two together. I quite like sets, running up and down an actual set. The arched window we now have on the set was built for us by a film company. The window is massive. It looks great when you have certain elements of a set made by actual craftsmen, and then you pop the digital bits on. We could have done it all digital on an LED screen, but I like the analogue element, the hand built element. It's what Saxon are all about these days, a mixture of old and new.”

Q. Would you say that approach also applies to the band's sound?

“Yeah. We've also incorporated new elements into the band's sound, but we're still the same band. Mixing the two is great but going too far either way doesn't work. I think we set the standard for older bands remaining relevant. I've steered the band away from just playing the hits. I wanted to get the band into a position where we're writing songs and releasing albums that are great. We've worked very hard to get to this position, and we have a great team of people working with us too.”

Q. Clichéd question, but how on earth do you choose the set list with so many songs to choose from?

“I choose the set lists because the other guys can't be bothered! They don't wanna get involved so they just moan when I get it wrong! I didn't want people to have to wait until the end of the set for the big hits, so we're straight in with those on this tour. There are big hits on the end too, of course. Luckily, we have a lot of hits! But choosing what to play and what not to play is always difficult. I think I've put together a good set list and it's going to be longer when we play the UK. Maybe I'll ask people what they want to hear. That's always good. We're always changing the set around, trying to make it special and unique for people who actually buy tickets. I sometimes tease the audience and say 'Shall we play an old song?' and then play something like 'Lionheart', which is actually from 2004. Sometimes you're moving on and people don't realise. They think 'Dogs of War' or 'Unleash the Beast' are newish albums, but they're not. At the time we brought them out they were closer in time to something like 'Crusader'.”

Q. And, of course, 35 years after the release of 'Crusader' you're still working with Paul.

“For the album artwork done by Paul, I made a serious effort during the 1990s to connect the band name to the artwork again. I started using a lot of historic things, using the historic value of the name Saxon with an image that Paul could work with. We worked quite closely together on the covers and he gets it right. I tell him what ideas I have and he interprets them in his own style. He always has a great eye for light. A lot of our covers, if you look at them, the light source is always quite special. I like detailed paintings and Paul's 'Lord of the Rings' stuff is absolutely brilliant. It was the first stuff of his I saw, which is why we used him to do 'Crusader' back in the day. He's a fantastic painter anyway, but for Saxon, Paul has a connection, because I like what he does and he likes the way my mind works. I mess around with so many slogans and things for titles, we end up with multiple choices for the album title. Sometimes Paul doesn't get the idea from me until quite late, and sometimes I'll send him a song and he'll do artwork from the lyrics. It'll be back and forth between us until I see something and say 'That's great! Go with that!'”