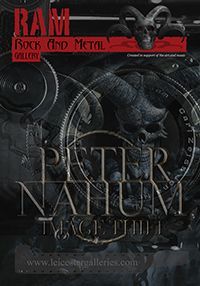 An English art dealer, gallery owner, author, lecturer, and journalist, Peter Nahum is known for his many appearances on the long running BBC television programme Antiques Roadshow. He is a patron of the work of Bloodstock founder Paul Raymond Gregory in his role as a celebrated artist, working with Paul designing frames, staging exhibitions, and producing various publications. Peter is also a keen photographer who has documented the Bloodstock Festival on more than one occasion. His work can be found online under the pseudonym Image Thief.

Q. How did you get started in photography?

“I've always photographed, from since I was about six. When I ran the gallery, I made big collages and I used to paste up books and things, but now I do street photography. I belong to LIP which is London Independent Photographers. My photography covers many different things but if you live in a city then street photography makes sense. I'm not a professional photographer; I do not set up shots, I do not do poses – I steal images, so that's why I called myself Image Thief.”

Q. Can you explain the concept of street photography?

“The best street photographers go into the street and shoot constantly, they're very fast, and they get great images, but that's not the way I personally work. I do go into the street, and always carry my camera at all times. Wherever I am I have a camera in my hands, but I wait for the image to present

itself, or the anticipation of an image, and then I'll work that shot. Maybe one shot and I'll move on, or maybe I'll work it a bit and move on. But I don't obsessively work shots. My experience from street photography is that the greatest street photographers are usually non-professional. Professionals do what they do and at Bloodstock for example they take a vast amount of photographs, but that's not how I work. I'm below the great street photographers and I'm not a professional, but I've spent my whole life looking at images, so my sense of composition is pretty good.”

Q. When shooting on the street, is it the subject matter than interests you or simply the image itself?

Q. Beginning photography at such an early age, you'll have spent many years shooting on film. Has the switch to digital affected how you work?

“When I worked with film, my count for a good shot was one in three, or maybe even better than that, and when I first started working with digital, it was also one in three. With paying attention in street photography, it's now got down to one in ten, one in twenty, but with real street photographers, it's one in five hundred. They shoot like hell and are very, very good. They take an enormous amount of shots and reject and enormous amount.”

Q. The switch to digital has seen widespread democratization in technology, particularly photography. Most people have at least one camera device on them most of the time, so now almost everyone's a photographer.

“Well, everybody is a photographer but it's rather like saying I read books but I'm not an editor. Everybody reads but it doesn't mean they're reading critically. Everybody takes photographs but they take them for their own pleasure. Out of these amateur photographs come some really good images, there's no question about it. Unfortunately they're taken with second rate equipment, and that's why I carry a good camera with me. If I take a good photograph, I want to be able to blow it right up. You may get a wonderful image on a iPad screen but it has huge limitations because of the size of the lens. Try blowing that up to a decent sized photograph and it falls apart.”

Q. Do you perform any image manipulation or other post-production?

“I don't manipulate them, no, but of course I do post-production in Photoshop and Lightroom because if you use these modern cameras they actually get too much information in them. You get much simpler, better photographs out of a point and shoot because they're taking away a lot of information to give you what you want. If you start with a lot of information you need to adjust that, mostly for light and colour balance. So, I do post-production but I don't do heavy manipulation. My images are my images.”