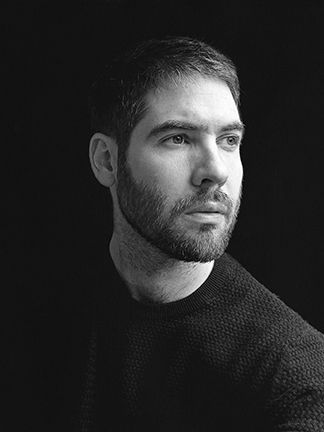 Eliran Kantor is a Berlin-based artist and illustrator best known for creating album covers for bands such as Testament, Hatebreed, Sodom, Soulfly, and Iced Earth. He is one of the exhibitors slated to appear in the RAM Gallery at Bloodstock Open Air 2017.

Q. When did you first become interested in music?

“My mom claims the first song I seemed to enjoy as a toddler was Leonard Cohen’s 'Hallelujah', but the first album I ever bought was Michael Jackson’s 'Dangerous' (brilliant Mark Ryden album cover on that one).”

Q. How did you get started in art?

“I started drawing around age four to five. We had a bunch of my dad’s (Ze’ev Kantor) artwork hanging around the house. He painted Donald Duck on my bedroom wall, and on his wall he drew the characters from Pink Floyd's 'The Wall'. I clearly remember myself finger painting on the hallway wall shortly after. The years following were mainly pen and pencil, with some occasional experiments with chalk and acrylics. I did cartoons mostly - mimicking Uri Fink - and imaginary Ninja Turtles 'screenshots' from an imaginary video game that didn't exist. At fifteen I did a few murals on my bedroom walls with acrylics, then was asked to paint a couple of friends’ walls as well. A few local metal bands saw these and asked me to design album covers for them.”

Q. When did you first begin to notice album covers? Did you consider the importance of artwork back then?

“First time I was taken by visuals accompanying music would have to be Pink Floyd's 'The Wall' film - Gerald Scarfe did the animation and also the inner gatefold for the double LP. Before that no music video, album cover, or live performance had the same impact. I was five and it was genuinely frightening. My first metal records were Iron Maiden's 'Killers', Metallica's 'Master of Puppets' and Megadeth's 'Rust in Piece' and I bought all three based on the cover alone. I knew the band names from Beavis and Butt-Head and had no idea which album I should get, but these three looked like masterpieces, and indeed they are. I didn’t consider it back then, but you can see these two examples as evidence for the importance of artwork: the former shows how visuals add another dimension to music and enhances its effect, and the latter shows its ability to lure new listeners.”

Q. What was the first album art you created?

“That would be Solitary 'Trail of Omission'.”

Q. Do you think the digital age has seen a dumbing down of album artwork and packaging?

“Packaging probably took a hit because of the lower sales figures. Budgets have shrunk so you see very few elaborate photographic productions with a massive set-up like Hipgnosis used to do.  As for covers - at first there was a shift towards compact covers that would be easy to decipher in low resolution. On a five-inch CD cover printed at 300dpi, you get 1500 x 1500 pixels of details, while your average fifteen-inch 72dpi computer monitor back in the beginning of the digital shift allowed for around 800 x 600 pixels of details. But since then, the resolution came so far that on your average cellphone you can now see 1500 pixels of details again just like on the CD, because the resolution got to around 450dpi. It’s smaller in inches so it requires you to look closer than the CD, but there’s still no loss of detail. So nowadays you see a slight shift back in terms of details, and I’m sure vinyl’s relatively rising new popularity helped that as well.”

Q. What media do you use? Digital, or physical such as paint, or a combination?

“It changes all the time and involves mixed media material and various techniques, which I switch up depending on the project. You can find me using very different approaches like drawing, painting, photography, clay, digital, pencils etc. in most cases during the same project.”

Q. Do you tend to collaborate with bands or be given a brief?

“It varies. Sometimes a band who gave you a complete free hand in the past might have a very specific vision for the new record, which is absolutely fine if it’s a strong one, as the main concern is to create something great together regardless of who came up with the idea.”

Q. Do you have a favourite album cover of those you've done, and any favourites by other artists?

“At the moment my current favourite is the cover I did for Loudblast’s upcoming live album - unfortunately I can’t share it publicly just yet. Of other artists, I still measure the impact of everything new I see against that of Iron Maiden’s 'Killers'.”

Q. Which band would you most like to create a cover for that you haven't worked with?

“I naturally would love to work with the bands I’ve always liked. The short list would for sure include King Diamond/Mercyful Fate, Iron Maiden, Judas Priest, Black Sabbath, Megadeth, Metallica etc.”

Q. What do you think makes a successful album cover?

“Exciting art can be complex or it can be simple, dark or light, sophisticated or childish, communicative or hard to process. The one thing I personally see as a constant is originality.

If you offer something new, it’ll become memorable even if it’s complex. It’ll affect the sophisticated eye even if it’s simple, and intrigue those who usually prefer other aesthetics.”

Q. You've also worked on instrument, stage set, and book cover design. Tell us about that.

“I’m a bit selective about these - the handful of instruments, stage designs and books I did take on were all related to Testament, and the other book cover I did was for my grandfather’s memoir from WWII. It was a very personal project, since he was an amazing human being with an amazing life story and I loved him dearly, and I'm glad I could give this book to my future children to read, since they won't have a chance to know him.”

Q. What are you currently working on?

“My last few pieces that were already revealed publicly were for Ex Deo, Crowbar, Disbelief, and Mors Principium Est. At the moment I have six covers which are done and awaiting a press release, and about ten albums booked for 2017, scattered across the year. Unfortunately I can’t reveal any info on those yet - better check my Facebook page often for any updates on that front. I’m also working on a few of my own concepts that are not meant for any specific project.”

Q. Have you seen the Bloodstock gallery before?

“I’ve seen photos but never got a chance to witness it in person. Judging from the photos it looks absolutely fantastic, especially Paul’s massive, epic pieces that look so impressive, right down to the framing work. I’m really looking forward to attending this year and see it in person.”