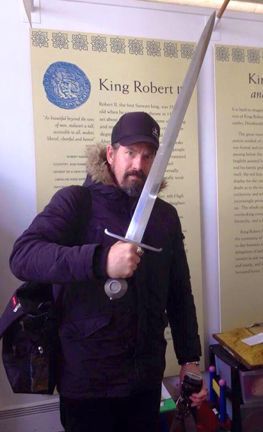 Hailing from Orange County, California, Christian Sloan Hall has created some of the most vibrant and distinctive rock and metal artwork of recent years, working with a host of bands including Amon Amarth, Byfrost, and Kvelertak, and publications such as Metal Hammer. After a successful showing in the RAM Gallery in 2016, he returns in 2017, helping mark Amon Amarth's momentous Bloodstock headline slot.

Q. You've been working on a graphic novel lately. Tell us about that and some of your other recent activities.

“The graphic novel I've been working on with Giles Kristian is called 'Black Floki - The Saga of a Viking Warlord' and is looking likely to be the most dark, violent and atmospheric graphic novel ever written and published. Heavily influenced by actual history, the Nordic landscapes I've seen in my travels there, and black metal, attempting to translate the sounds of the music in to the illustration style. So it should prove to be most epic, and it's been consuming most of my time as of late. He actually got hold of me back in 2013. there's a re-enactment group in England that does Anglo-Saxon stuff for museums and they are fans of my work for Amon Amarth, so he heard about me through them and sent me an email. I had no idea who he was but I looked him up and sure enough he's a pretty renowned author. As far as other work I've been doing since we last spoke, besides all the Amon Amarth stuff, I've been working on the upcoming Dragonlord album, Eric Peterson of Testament's black metal project, due for release later this year. I also did a few illustrations for a Metal Hammer UK feature on the return of Glenn Danzig to The Misfits, which was a huge honour. The fifteen year-old in me was doing backflips!”

Q. Has working on the novel been comparable to anything you've done before, or have you had to learn some new skills or disciplines?

“It's kinda like the stuff for Amon Amarth but, yeah, there's a whole new aspect to it with the sequential thing. Rather than telling a story with one picture, I have to tell it over many pages. I've been doing a lot of trying to work on speed too, get it done faster.”

Q. Turning to Amon Amarth, some of your work for them was used as part of their stage set – specifically the vast backdrop – and of course we'll all get a chance to check that out when the band headline Bloodstock this year. What's it like seeing one of your pieces reproduced on such a large scale?

"Oh god, it's the ultimate art show, seeing that like, two stories tall! I was worried about the resolution but it came out perfectly. I think they get them printed in Germany and the Germans are still the print masters. Since I talked to you last time I've actually done another backdrop, an illustration of the title of a song 'First Kill'. It's some Viking ships coming to shore and the guy's wading through the water trying to get the honour of the first slaying. It's the main guy cracking the other dude's head in half with an axe. They've been touring with that for quite a while and I think they have it on t-shirts now, and they made prints of it too.”

Q. Your work will once again be featured in the RAM Gallery at Bloodstock this year – what can we expect to see?

“A lot of other work actually. Some stuff I've done for DC Snowboards, a band called Powerhitter, but mostly Amon Amarth stuff - including both of the backdrops – just because it coincides with them headlining the gig. I've been working with The Flood Gallery in London who've done some giclee prints of all this stuff which are just amazing, the best reproductions I've seen of my work – aside from the actual backdrops – and they're supplying all the prints.”