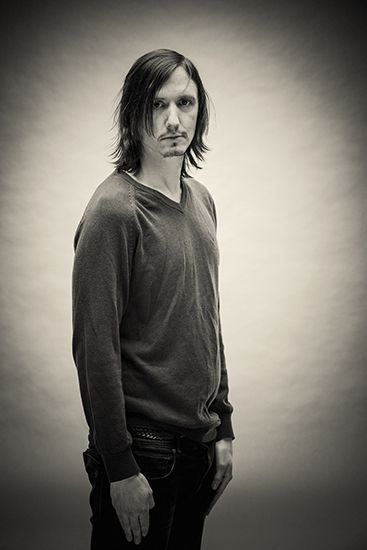 Alongside his day job drumming in French progressive death metal outfit Gojira, Mario Duplantier has spent much of his life drawing and painting, gaining particular inspiration in recent years from his extensive travels with the band. Ink, old paintings, and even garbage are just some of the media he employs to create abstract, surrealistic work featuring hybrid creatures and strange animals that tell stories both bizarre and unsettling. An exclusive selection of Mario's art appeared in the Rock And Metal Gallery at Bloodstock 2016.

Q. How did you first become interested in visual art?

“I grew up in a family that was really into art. My father was a very talented artist and my mother was also into art, a very eccentric, enthusiastic character who was always pushing us to create. So instead of turning on the TV, she was always getting us drawing or doing things outside the house. She was really into creativity so when we were children we were surrounded by pens and paints and white paper everywhere in each room, so the process of creating for us was very easy and spontaneous. I started to make some drawings at the age of eight. I remember my father was very precise, a real perfectionist, a real artist. He saw my drawings and was a bit surprised. He saw something interesting in my work which was raw and very naïve, not about technique but just the spirit behind the drawing. He told me I had something and he pushed me a little bit more. When I got into music at age eleven I became obsessed with it. After that I was just drawing and painting for a hobby, it wasn't a discipline. But I took it more seriously when we starting touring all over the world. It was very spontaneous for me to just draw and sketch everything, and it was the easiest way to stay creative while we were on the road. This was when I was maybe eighteen years old.”

Q. Do you find that painting and drawing while on the road helps you to relax and unwind from the stresses of touring?

“Yeah, totally. Being in front of the screen of a TV or computer, you can relax, but when you draw or paint it's organic and you have a physical approach, and it's the best way for me to relax, to stay focussed on something tiny and precise and just let my inner imagination go a little bit. It's good for the soul, the spirit, and everything. I don't like playing video games and I feel a bit depressed seeing so many bands playing them. For me, it's better to stay creative, and when I spend two hours drawing before a show, it's always a good show after that.”

Q. Many people might naturally expect you to being creating the album covers for Gojira.

“I'm a little disconnected from album artwork and the music industry, and it's a really personal thing for me just to express myself. Even with Gojira it's hard for me to make the link so it's why Joe [Duplantier] does the covers. While he's writing lyrics he's always sketching and I think that fits perfectly with the lyrics. I always pushed Joe to make the covers.”

Q. There's something primitive and atavistic about your art, reminiscent of cave paintings at times. In some ways they're another reminder that physical expression through painting, carving, and symbolism etc. existed before the evolution of the written word.

“I agree, and the way I usually express myself is without words. For example, I am doing all the video for the band while we are on the road, some documentaries, and it's always without any words. I'm better to express myself without words and my drawings are exactly the same. I'm probably a bit autistic! But it's right that before writing came drawing as the first source of expression, and this is very primitive for me. I feel very connected to the primordial and primitive aspect of humanity and it's always about nature. In my drawing, it's not about politics or social ideas, it's about existence, which is why you cannot fix it in time. The impact of religion also fascinates me. We are lost in the universe and we need to believe in something, so there is always this small human being in my paintings in a huge cave or on a huge planet or in front of a huge animal. The proportions are exaggerated but it's the idea of we are so small and we know nothing about anything! We evolve, but we are still ignorant compared to the immensity of the universe and the mystery of life, and I love to make this perspective in my drawing.”

Q. Are you particularly prolific? How many projects might you be working on at any given time?

“It's a lot actually. Today, for example, I'm working on ten different drawings. It's a very simple way to express and I use techniques that are easy, like water for example. Today on the tour bus I put two drum heads on the floor – reversed – put water on them and drops of Chinese ink, and just let them dry. It will create a background and after that I will let my imagination go and add something with drawings. It might only take me five minutes. I love the simplicity and that it's still naïve. I never go too crazy on details. It's very raw and simple, almost like a child's art.”

Q. What were your thoughts on the RAM Gallery and have you ever staged a solo exhibition?

“The gallery at Bloodstock was amazing! I really enjoyed it and it was fantastic to meet Paul. Gojira loves Bloodstock and we are all big fans of it, so being part of the gallery was fantastic. I would love one day to work on one series of images for one event. I've had some offers and people often contact me and they want to arrange an art show, but I would need to take time out for it.”

Q. How would you sum up your style?

“It's very automatic and spontaneous. Sometimes I have a pen in my hand and I have no idea what's going to happen, but it's always about something inside me that obsesses me. It's a good way for me to express my demons, my thoughts about religion, about humans, about animals, about our condition of existence. It's philosophical, spiritual, and I put everything of myself into these drawings.”