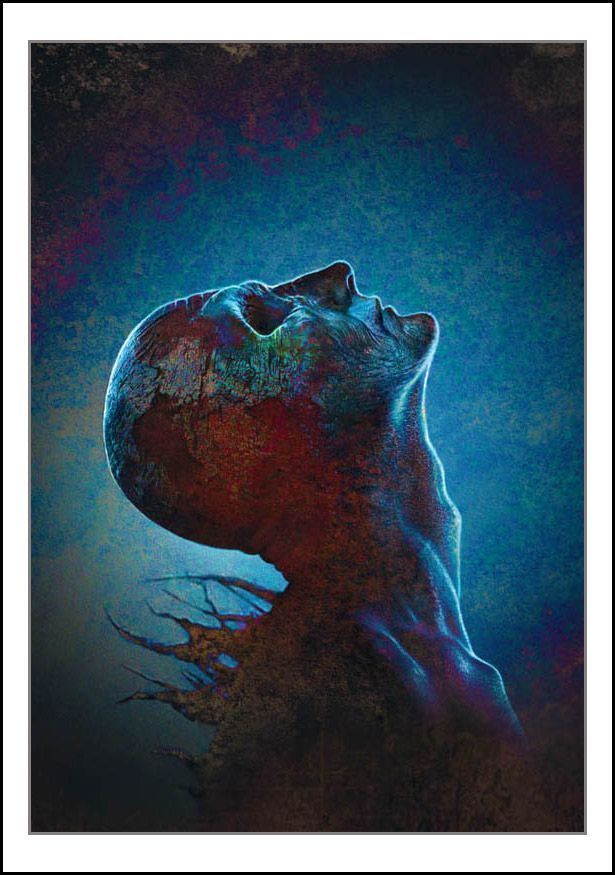 Former Marillion frontman Fish is one of the best-known voices in progressive rock. He released 11 UK Top 40 singles with the band including 'Kayleigh', 'Lavender' and 'Incommunicado, and five Top Ten albums, including a number-one with 'Misplaced Childhood'. During his long solo career, he has released a further five Top 40 singles and a Top 10 album. A selection of artwork from his final studio album 'Weltschmerz' will form one of the highlights in the RAM Gallery in 2021. The artwork is by Mark Wilkinson, known for his work for Iron Maiden, Judas Priest and many more. Mark not only created the iconic early Marillion covers, his work can be seen on almost every Fish solo album since 1990's 'Vigil in a Wilderness of Mirrors'. Mark is also a previous exhibitor in the RAM Gallery. Fish and Mark chat about the genesis of 'Weltschmerz' and their long-time collaboration.

Fish: “I was in Germany with my wife in about 2015 and I was having issues and I was questioning what I was doing. I knew I had another album to make, but I was intimidated and felt I was running over a lot of old ground, and the music business had changed etc. But I felt there was one great album in me where I could pull all resources. When I left Marillion in 1987 I left on what I thought was the best album we ever made together ('Clutching at Straws') and I thought that was really how I'd want to leave a solo career, on an absolute peak. At the same time the Syrian war was occurring and lots of similar things were coming into focus. I was spending a lot of time in Germany and was immersed in the Germanic and that's when I came up with weltschmerz – pain of the world - and that's how I was feeling at the time, everything was quite overwhelming. Mark and I talked about the title and I didn't really wanna write a first-person album, I wanted to write about characters dealing with the world in their own ways, with problems that are becoming even more prevalent – mental health, suicide, the refugee crisis. Then my dad died and that really knocked the foundation stone away from me. I've always been interested in gardening and I spent most of 2016 in the garden. It really helped me and it was a sanctuary and a place to think. 'Weltschmerz' emerged from all that, and the image of a guy being transformed into a flower in the artwork. That was the original visual objective we had. Mark wanted to use 3D and live animation which would benefit the live set but when he brought me his first pieces we had a disagreement. We had to rethink. We had been spending a lot of time away from each other, a lot longer than we would have preferred. I would normally have fed Mark lyrics a lot further ahead of the game than I did with 'Weltschmerz' and it wasn't until we really got into the lyrical heart of it that everything started to come together.”

Mark: “'Weltschmerz' was a tricky one because Fish didn't bring that much to begin with, and he normally does. He normally has an idea for the artwork before he's actually written a song. It's usually the title, an idea for artwork, and we riff off the ideas. I had an idea for a figure of a man almost like a statue which gradually gets wrapped in back pain. I kinda saw it as if these spikes came out of his spine and they turned into very sharp, jagged coral-like rocks and gradually he would fall to his knees and these things would wrap around him and totally envelop him. They would be like coral wings but they would eventually open like the petals of a flower. Fish liked the idea very much and he kinda let me run with it. This coincided with a time when I really wanted to experiment with a 3D program which had been recommended to me and I used it to create this figure. He put out a teaser for the album, an EP called 'A Parley With Angels', and when I presented him with the artwork he really wasn't sure, although he decided to run with it. But for the album, it was almost a case of going back to the drawing board. Fish said to forget the 3D stuff and that he'd like to see something a lot more organic. What ended up as the front cover is probably one of the simplest things I've ever done for him. Fish really liked it and it's the single defining image of 'Weltschmerz'.”

Fish: “Thinking back to '13th Star' which is another album Mark and I had a difference of opinion on, I wanted a star on there which was taken from an Egyptian tomb and denoted heaven. But inside when you open it up, there are the original ideas we had. For the cover, we went with the yellow star – which Mark didn't get on with – because we had to transpose ourselves from the 12-inch vinyl album to the CD which is a completely different way of thinking. Back then, I was still putting stuff out to retail and you wanted something that was gonna catch people's eye in the shops. It's always difficult going from LP to CD. With 'Weltschmerz'. we weren't going to retail so we just said we'd design an artwork, pure and simple. So we ended up with a 90 page book, and that's why the original idea Mark had of the guy eventually being enveloped by the flower moved back in and worked with the change in the central imagery.”

Mark: “Bands don't just have a CD now, it's lots of special editions, and it's never one image. So even when we had the image for the cover, I knew we had a huge book to fill. Obviously I had help with that from other illustrators and photographers, but it gave me a lot more scope. The pictures you see in the gallery this year at Bloodstock are the main other ones that I did. So instead of having a shopping list of items to include in one album cover, you've got this book which allows you to really go into a lot of detail, and so covers don't have to be so detailed. You can do images for each song, whereas in the past I would put lots of symbolic references to the songs in one image. Fish and I just carried on over the years, and we became a lot closer. He has a huge interest in films, as I have, and we like a lot of the same directors. We always had an easy relationship because we had good visual shorthand.”

Fish: “In Marillion, we were all coming from the '70s gatefold sleeve era and I was brought up on Roger Dean who was my favourite artist for albums such as 'Tales From Topgraphic Oceans' and 'Yessongs' by Yes. I felt the band should be associated with an artist and that we should have an image – which was the jester I'd come up with years before – and Mark translated that. With Mark, I can rattle through images and come up with loads of outlandish ideas. We've just got a great relationship which over the years has grown. He's put together some amazing things for me. The 'Weltschmerz' sleeve, rather than looking at it as one image, if you look at the deluxe edition, it's a cracking piece of work. When people talk about great album artwork, Mark isn't mentioned as often as he should be. In the rock community, yes, but overall, no. The way he morphed from airbrushing all the way through to what he's doing now, it's a fascinating story that mirrors what happened to me as a musician. We've fed off each other in so many different ways and gone through so many different styles, from the original heavy duty airbrush work to the acrylic work he did on 'Field of Crows' and then moving in digital stuff. It's been a journey, and there's always been a strong sense of camaraderie. There's a mutual appreciation society between us, for what he does and how he can sense what I'm thinking. The 'Weltschmerz' cover in particular. The front cover image just sums up the whole concept.”