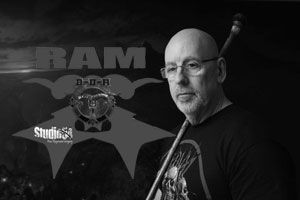 Q. One aspect of the gallery this year which will be a little different from previous years is that you won't have any of your own huge monolithic Tolkien pieces on display.

“With the Priest Wall being a specific size it meant that one wall was taken up and we had to work the gallery out differently this year. But the Bloodstock artwork wall – what I call the 'history wall' – that's now extended beyond one wall. So what I thought I'd do with that is add the artwork for 2017 to another wall with Cynosure's 'Infernus' guitar next to that and then go along with guitars – there are twelve this year – with images in between. Although because of the Priest Wall and having all the guitars means that I don't have any large pieces this year, I will have some work there including a Molly Hatchet image which will go in between Cynosure's Molly Hatchet guitars. I might bring back a painting I did of Lemmy to sit between the Motörhead guitars. The problem I have now is that I have so many pieces of artwork and I haven't decided exactly what I'm taking. The space just isn't big enough. I'll be bringing back the Saxon 'Heavy Metal Thunder' painting – that'll be between the Saxon guitars - and I'll have prints available of that this year, as well as prints of Molly Hatchet's 'Devil's Canyon' which was the first album cover I did for them. There's also a new Molly Hatchet painting. It's a celebration of the 40th anniversary of the band's first album and it'll be available as a limited edition print.”

Q. Each year you create a unique piece of artwork for Bloodstock. What was the inspiration behind the piece for 2018?

“The inspiration for this year was Judas Priest. If you look at the background and the church and the more gothic aura to it. When I have an idea for a painting it doesn't always have to be definitive. It's a bit like lyrics in a song – what people interpret isn't necessarily a fact but it is for them, and it's the same with the artwork. For quite a while now I've done something that works in relation to the headliner. But obviously when you're using something that is a logo – which is effectively what it is now and Stan is pretty much the same year on year – it's the background and the circle which makes the difference. I may go back to doing something different but at the minute it's a branding thing.”

Q. You commissioned six guitars from Cynosure this year – two Judas Priest guitars, two Molly Hatchet guitars, and one each from Bloodstock 2018 headliners Gojira and Nightwish. What were your first impressions of the finished pieces?

“I've only seen the Priest guitars. I was absolutely blown away. I saw some sketches beforehand but it's totally different when you see something three dimensional. When you see the real thing and how he creates them, it's just brilliant. The management, the record label and everybody that's seen them has been blown away. It's the same thing that happened with his Motorhead guitars. The other 2018 guitars are on their way but I won't see them till we get them for the gallery and open the cases! But Oliver [Cynosure] actually took the Molly Hatchet guitars to the studio with the band and they thought they looked great. As an artist I have done things like illustrations for books and at one point decided to pull away from that because I became rather bored with dealing with people who had no idea what they were talking about in relation to the book. I forget which book it was, but I was doing illustrations and sent some of them over but they said 'Can you do this? Can you do that?' and I said 'Have you actually read the book?' They said 'no' so I said 'Then why are you telling me what to do?' What I tend to do illustration wise is what the book's about. So when I commissioned Oliver to do the guitars, I gave him free reign. They're not my creation, they're his, and I think that's the best way forward. It enables him to create something that inspires him and that's worked really well. I'm a great believer in trying to provide a platform for other people – it happened for me when I was a kid with a teacher who was very passionate about art – and it inspires you, and it's very much like we do with bands and Metal 2 The Masses with Bloodstock.”

Q. The line-up for the gallery this year is once again quite diverse with some new names in there too.

“Well, Krusher's designs I think are brilliant and I really like him as an individual. He's a bright lad and very passionate. I think his design for [Black Sabbath's] 'Born Again' is brilliant, I love it. It's a great image. It worked really well and I think it surprised him. It's a bit like Mario Duplantier's stuff in a way – you look at it and think 'I really like that but I have no idea why!' It's primitive in a way but it really works. We have very different styles on display and I think it's good to have that difference. Ester [Segarra] really deserves space because I think her work is brilliant. I have a camera but I have no idea what to do with it ha ha! Working these things out is a work of art itself. It's good to have these different disciplines in there and photography is a major part of the music industry. For me it's about artists being creative for themselves. Like I said earlier – them creating something, not me telling them what to do. I'm giving people the space to actually exhibit their work and for the fans to look at it and I think they'll be blown away.”

Q. Your own work, particularly the large Tolkien pieces, is very rarely seen in public, but there are plans for a possible exhibition in Japan next year.

“The problem with most of the work is that it's so huge. It can only be shown in museums and 2007 was the last major exhibition. A few pieces are shown here and there but to have a major exhibition it's costly to get them shipped and insured and curated. But the people who are doing this in Japan are passionate about the work and about Tolkien and are working towards a March 2019 schedule. If it happens it will be the biggest one to date. It would be great to have all that work together.”