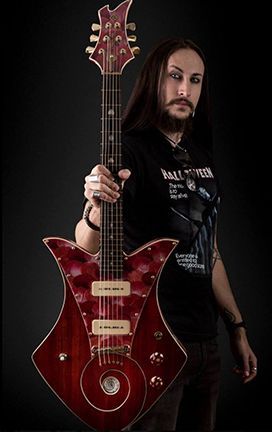 Guitar designer and maker Oliver Andrew aka Cynosure has been part of the RAM gallery every year since the inaugural exhibition at the Bloodstock festival in 2014, contributing some of the most   visually arresting and technically accomplished pieces thus far. Already half way through the work set to debut at Bloodstock 2018, he reflects on the past, present, and future of the gallery.

Q. You've talked in the past about how the RAM gallery work has forced you to up your game as a luthier. Presumably that has also been the case with your creations for 2018?

“When I first started out building guitars they were simplistic. They did incorporate different elements of technology like LEDs and other gadgets which separated them from regular guitars. There were steampunk aspects and other weird intricacies. But I remember when

Paul [Raymond Gregory] had this idea for me to create a guitar that would represent the RAM gallery – essentially a human skull with ram's horns – I had no idea how to create that. But at first it was just about designing it to make it as interesting but at the same time as specific and visually encapsulating as possible. It took me several weeks to figure out how to create it because for a start I didn't even have the tools to make it. I had to work around that and come up with different techniques and methods. It's a learning curve each and every time.”

Q. Your work reminds us that art isn't just something that hangs in a frame, and also that when one places objects which people take for granted within a gallery context, it literally and figuratively sheds new light on them.

“I definitely think that when you bring all these elements together, whether it's my guitars and paintings or books, you see them very much in relation to each other, dichotomised with the music itself, or in my case, functionality as an instrument. Having it all in this context makes you realise how symbiotic everything is together, but also allows you to see the individuality. It highlights different things in my work. I've sold guitars before, but as instruments as opposed to an art piece. But that is my whole platform of creating guitars – they are dichotomies of instruments and art. So the RAM gallery really allows us to appreciate the artistry behind all this, for sure.”

Q. The professional gallery context also emphasises that, as much as heavy metal – often over-the-top and hyper-real - has a sense of humour and irony and doesn't take itself too seriously, it is not a joke.

“There are over-the-top elements and fantastical elements in my work but sometimes you have to take a step back and look at the piece, not just for what it is, but what it represents and the concept behind it. Creating them actually allows me to proceed with life. My everyday stress and frustration goes into the wood. They have a very specific purpose. Ultimately, when you see people's faces light up when they look at that instrument or that artwork, it makes it all worthwhile. And yes, it emphasises the artistry in this genre.”

Q. Is it too big a statement to say that getting the RAM gallery gig has changed your life?

“Ha ha! For sure. I think without it I'd still be creating guitars. However, it's allowed me to connect with so many different people on so many levels, both professionally and personally, and follow a new path in life within the work itself. I've become a lot more extreme in terms of the designs, and the contemplation of the concepts behind albums or whatever which help inspire these creations. For me in that sense it's definitely life changing. Bloodstock is all about community, and it really does bring all these different people together. I can go to a guitar festival but my work is then brought back to the idea that it's just a guitar. Whereas what I think Paul's trying to do is bring all these different artists together and present it in such a way that the work is more that what it first appears as just a book or just paint on a canvas. It's something that can change your life. When you look at a painting, say Rembrandt, it's a painting, but it's beyond that. It can create a new way of thinking and the same can be said of books or guitars, which can help unleash emotions and new ideas into the world.”

Q. In general, the feedback about the gallery has been extremely positive right across the board. How have your conversations with fellow exhibitors been?

“The feedback I've gotten from all the exhibitors has been that it's such a very momentous occasion to be asked to showcase their work in one place amongst other like-minded artists. It's extremely important that we're able to meet like-minded people whose work may be different but that still represents heavy metal and rock music in a certain light, a very professional light. My experiences with the other artists have always been interesting in that they talk about community a lot. More than just having your work displayed, it's about connecting with people.”

Q. Paul Raymond Gregory has once again commissioned bespoke instruments from you. As always, everything is kept under wraps until the gallery opens, but can you give us any hints about what you're currently working on?

“I have a total of four commissions for Paul. I'm at probably the most exciting time, the stage where the necks and bodies have been created and it's just the fine details now, like the inlays and electronics. One of the guitars is directly inspired by an album of a particular band, representing the concept and the visual imagery. I'm also inspired by some of the lyrics, and the more you look at it, the more you'll see that. It also focusses on the specifications of one of the guitarist's personal guitars.”

Q. You seem to feel that with each passing year the gallery takes a step closer to realising its ambition of a permanent stand-alone presence.

“The RAM gallery is very unique in itself. I don't think there's anything like it at all. As far as I know, Bloodstock started as a conversation among a group of friends in a pub around the idea that there was a lack of a certain kind of metal festival in the UK, so why not create that? Fast forward a few years and look at the progress. So I don't see any reason to hold back. It's thinking individually and creatively that creates new things. So much thought has already gone into the gallery, so I don't think there's any limit to what could be exhibited in there as long as it all links to rock and metal. There aren't any other parameters. My job is just a very small part of the overall thing, but I'm very happy to be part of it.”