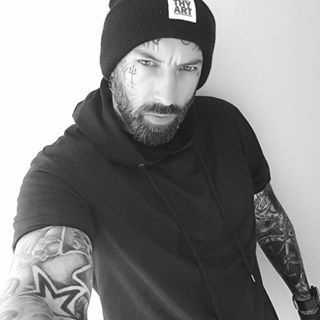 Making his RAM Gallery debut in 2019 is artist Danny Edwards. Although currently best known as a tattooist, Danny has drawn and painted since childhood, and the selection of his work on display this year marks his first ever exhibition.

Q. How did you get into art in the first place?

“I've pretty much always been drawing, but I got into painting pretty much during the past five years. I've always been a big movie fan so I've always drawn portraits and characters and stuff. I've only just recently started promoting my paintings. I pretty much do them and stick them in a cupboard, but now my missus, she scans them and makes art prints of them. Prior to that I just painted for myself and tattooing was my day to day job where I get to do art for other people.”

Q. Both your tattoo work and your paintings feature a great deal of portraiture. What's your approach to that?

“I draw a lot of caricatures and sometimes before I draw a portrait I'll do a caricature so I can find that thing that makes them unique. There's a knack to capturing the essence or expression, and I don't know if I've developed that or trained myself over time to find it. Some people do a portrait kinda photo perfect but I find that quite boring and always try to find that thing that just makes them pop, makes their character stand out. Not finding something and exaggerating it for the sake of it, but maybe a look or a glance or something. Like Jack Nicholson's eyebrows or whatever.”

Q. Both your tattoo work and your paintings also feature many themes of horror and the macabre. Where do you draw your inspiration?

“It started with my Nan, weirdly enough. I was brought up by my grandparents and my Nan had a morbid curiosity. Every weekend we would go to graveyards, she had a fascination. When I was about ten she took me to see a car being pulled out of the local river where some woman had committed suicide. They dragged this woman out and I'm there with my Nan who just thought it was completely normal. Things like that stayed with me. She'd tell me stories about when they used to live near graveyards and my uncle dug up a load of skeletons and they used to hide them in the cupboard. I was like, wow, fascinating! And I then went on to horror movies and stuff like that.”

Q. Your work shows a strong interest in serial killers and the 'real life' horrors in society.

“Yeah. Nowadays we're just overwhelmed with stuff, but back in the day when my Nan would say something about Myra Hindley or Ian Huntley... My Nan was quite religious and she would cut out images of the missing girls and put them on her wall, put a cross next to it, and pray to it every night that they be found. She did that so many times throughout her whole life. Inevitably, at the end of the story, they're dead, but those sort of things stuck with me and I was fascinated as a teenager.”

Q. Where did your interest in tattoos come from?

“Again it stems from my Nan who had a couple of secret tattoos, like little hidden roses and things like that. My grandad was military and was totally anti tattoos or anything like that. Later on when I started to get into metal music, I'd see guys from Sepultura or Slayer or Pantera with tattoos, and one of my first tattoos was 'unscarred' across my stomach like Phil Anselmo. The whole metal thing and tattoos went together for me.”

Q. Tell us about the work you'll be showing in the RAM Gallery.

“They're all portraits. They're all actually in different styles. I don't think I've got a particular style because every time I go to do a painting, I kind of go to it like I don't know what I'm doing, and I'm trying to find my way through the painting, experiment, and see what happens. I'll go over it however many times it takes. There's no one method I've got. Amongst others, there's a Hannibal Lecter one, a Marilyn Manson one, there's a Chester Bennington one – I'm trying to sell some prints and raise money for a mental health charity. If I'd had more time I was going to try to paint some of the bands that are playing this year, but I've got my wedding the week after Bloodstock!”