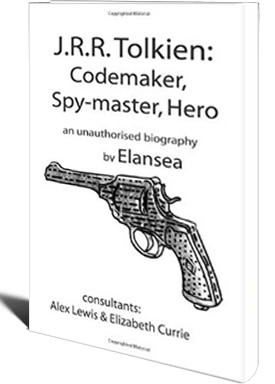 Q. Both Paul and you have been involved with the Tolkien Society at various times over the years. How did you actually meet?

“We kind of hooked up through The Festival in the Shire, which is a celebration of the life and works of Tolkien. I was organizing the academic conference for it. Paul was involved from the point of view of advising the organizers about how to run a festival – practical help, moral support with putting it on. I knew Paul’s name and then I suddenly realized who he was and we got to meet up. From there on in it was just following up each time we met and doing one thing and another.”

“I was amazed at the volume and breadth of what he’d done. I wasn’t aware that he’d tackled so many things, and then when I saw some of the pieces in real life – which are really quite large – it was very impressive. It’s not strictly to the text - he takes the text as a jumping-off place for his own artistic endeavours, and I don’t think Tolkien would have been unsympathetic with that approach at all. I think he would have been fine with it because, yes, you can do strictly dead accurate stuff and take the text as gospel, but the most important thing is that Paul has his vision and his art speaks to you. You can certainly take it as Middle Earth, but you can also take it as just pure fantasy art and look at them for their own merit without even needing Middle Earth.”

Q. What do you think Tolkien himself might have made of the work?

“Tolkien was always interested in art and I think he’d have been pretty impressed with the sheer size and ambition of some of the pieces aside from anything else, and the technique is obviously very strong. I think Tolkien would have appreciated that.”

Q. From artwork to lyrics to band names, Tolkien’s influence on the realms of rock and metal has been vast.

“Absolutely. It’s been an amazing inspiration. Even I’ve written songs inspired by Tolkien!”

Q. Although now immensely popular amongst the public thanks largely to the films of Peter Jackson, the literary establishment hasn’t always been kind to Tolkien. Might there be a parallel here with heavy metal and the mainstream music media?

“Well, both show no sign of waning and falling by the wayside as all the critics were hoping! I’ve always been of the opinion that Tolkien’s going to be as important to English literature as Shakespeare in a couple of hundred years’ time. If anything, it’s going from strength to strength and I’m rather hopeful that we’re beginning to see something on that kind of scale already.”