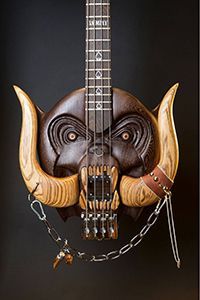 "Tired of seeing the same old guitars and designs, luthier, artist, and musician Cynosure decided to change all that and create stunning, original conceptions he calls 'functional art'. Each guitar is hand-crafted one at a time. It's his belief that each instrument is an individual and tells a unique story with its own history, distinctive properties, and idiosyncrasies. Every Cynosure guitar is both a highly-collectible instrument and a work of art.

Q. There's a saying that if you do something three times it's a tradition; this is your third time in three years exhibiting at the RAM Gallery – how does it feel to now be a 'regular'?

“Each time I have the opportunity to exhibit my work, it’s always a pleasure to connect with all those people involved, either during, or beyond the process of creation. Paul Raymond Gregory has been my client, my commissioner for the past three years, and has granted me the privilege of designing and building custom instruments to be showcased in his RAM Gallery. I think that the RAM Gallery goes beyond the expectations and standards of most art galleries, namely, the demographic pertaining to the metal music/artwork dichotomy, but also the quality and overall composure of the works exhibited. To be considered a ‘regular’ is of profound importance to me, a prestigious honour. Each year, I like to exceed the parameters of my clients’ vision within the artworks. Not only does it allow me to present my skill set, but also their initial response garners a long-standing working relationship. 2014 was my introduction to Bloodstock and the inaugural year of the RAM Gallery. I had been in contact with Paul for well over a year or so in regards to creating a custom instrument that could be featured in the upcoming gallery; a guitar that dissolved the boundaries of conformity and bridged the divide between musical instruments and ‘art’. I had full liberty to create. The result was the Bloodstock ‘Infernus’ model; an inverted cross that acted as a statement piece yet encompassed the concept of individuality, strength, style and ergonomic sophistication. Last year, 2015, the eponymous ‘RAM Guitar’ was proudly displayed amongst some of my other works in the gallery. The guitar highlighted the possibilities of creativity, yet, still maintained a distinction on functionality as a playable instrument. Based on Paul's original artwork, the 'RAM Guitar' is a statement piece that symbolises the expression and reverence of the Gallery.”

Q. How did the commission for the 2016 guitars come about?

“During the last few months of 2015, Lemmy was experiencing complications and was subsequently hospitalised. Two days after his 70th birthday he was diagnosed with cancer, considered terminal; a further two days later, he died. Paul immediately contacted me to design and build a special instrument that would symbolise the legacy and sheer prominence of the band, but also commemorate the life of Lemmy. After designing several options, Paul solidified his decision on the 'Snaggletooth’ Motörhead emblem. essentially, a re-creation of the official Moorhead mascot manifested in wood. Impressed, Paul opted for another bass guitar, stylised on one of my sketches; this would become the ‘Moorhead Bass’, a more militaria-inspired instrument influenced by Lemmy’s love of WWII-era German military memorabilia.”

Q. How do you regard having your work as part of a wider commemoration of Lemmy at this year's Bloodstock?

“It’s always humbling and of great prestige to have my art featured amongst some of the most talented artists and individuals to grace the Gallery. The newly installed ‘Lemmy Wall’ will feature an array of media and artwork commemorating the life of the man, the legend, Lemmy. The two Moorhead bass guitars were the result of six months hard labour, intricate detailing and meticulous carving, all in the prospect to offer my personal respect and gratitude to such a pioneering and dominant force, not just in rock, but music in general. In true Moorhead fashion, the Lemmy Bass and Moorhead Bass are equally symbolic and distinctive as fully-functional instruments. There is perhaps more of an emphasis on them serving as musical instruments than purely conveyed as an apparatus of aesthetics. These new Moorhead instruments are conceptual effigies of my innermost appreciation and esteem for Lemmy. I’d like for them to be permanent fixtures that live on as works of art, that tell a story, revered, and promote conversation and veneration for the man in question.”

Q. Tell us a little about the design and build of your latest creations.

“As Lemmy’s instrument of choice, the bass guitar seemed the obvious decision and course of action to take. Lemmy was regarded as playing the infamous Rickenbacker, though I didn’t think it creative enough to simply reproduce it. I envisioned a totally-unique creation built only with the band in mind. The body is made from a beautiful cut of African wenge wood, a very dense and exceptionally strong material known for its high-tensile strength, resonance and intricate grain-pattern. I chose this particular wood due to its density and colouration. A darker wood hue was necessary to achieve my vision. The grain is of exceptional beauty, very subtle, yet elaborate. Coupled with Zebrawood tusks to accomplish a two-tone stylistic that highlights the smaller, more sophisticated details. The tusks are removable, bolted with machine bolts, secured with brass inserts. Also, perhaps the most intriguing aspect of the guitar is the eyes. They function as volume controls. Notable features are the animalistic teeth that encompass the Fender 60‘s custom pickups and nose ring that add an additional layer of decor. The neck, constructed from Peruvian Walnut and Zebrawood (with maple veneers) establishes a strong, distinctive, colourful multi-laminate capable of anchoring the strings in perfect formation. The fretboard displays steel-inlayed Ace of Spades, another ode to Lemmy. The other, the Moorhead Bass guitar, is in complete contrast. A multi-laminate (both body and neck) of mahogany wood with Peruvian veneers, more simplistic in design, yet equally as alluring, promotes a WWII-era German military-esque flair to a uniquely-unyielding structure. The fretboard, like the Lemmy Bass, is made from Wenge wood, and of course incorporates inlays that identify the band; the famous Iron Crosses with 12th fret ‘Moorhead’ inlay. Engraved textured steel backplates are screw-less, fastened by rare Earth magnets, a relatively new technique designed to establish complete unobstruction.”

Q. Is building a bass – four string or otherwise – essentially the same process as constructing a regular electric guitar?

“I was always hesitant about creating a bass because I assumed the building process to be more involved, labour-some and complicated. It turns out, it is practically the same. With the exception of wood needing to be cut to accommodate a different scale length, everything remains the same. Essentially, a bass guitar is an over-sized guitar with few dissimilarities. I’m glad I had the opportunity to create these bass guitars as I have overcome the fear of such an instrument. I know that may sound slightly peculiar, being a luthier, however, every artist has their reservations. Fortuitously, the bass guitars happen to sound impeccable. It’s always a wonderful thing when you experiment, use your craft as an alchemical process and not only create a work of art, but harness and develop your skills.”

Q. How do the Lemmy basses play, and have you had any feedback (pardon the pun) from other musicians?

“During the daytime, I work as a Senior Guitar Technician in an internationally-acclaimed music store. My co-workers are all highly-skilled musicians themselves so, of course, I had to hear them play my instruments and gather a repertoire of opinions; nothing but pure praise. It’s very rewarding to hear such talented individuals light up in the company of your artwork. I put more emphasis on the functionality, the execution of sound than the aesthetics. If it looks good, you can be comforted in knowing that they’ll produce a fantastic tonality. I’m anxiously awaiting for them to be played at Bloodstock. I’d like other bands, hopefully Moorhead, to lend their talents to the instruments to do them pure justice.”

Q. In general, what sort of response have you had to your work as a result of exhibiting in the gallery?

“The RAM Gallery has provided me with a platform unlike no other, to expose my work to the most receptive of audiences. Bloodstock allows my work to flourish with its environment and emphasis on music dichotomised with art. My work is, in essence, a fusion of both. With an audience of 15,000+ people, Bloodstock and the RAM Gallery make it very easy to be approachable. I have had a significant amount of interest in the creation of custom instruments due to showcasing in the Gallery and it also opens up to the more prominent bands to experience the artworks. Currently, after Bloodstock officially released the photographs of the Lemmy Bass and Moorhead Bass, I have received a positive onslaught of emails requesting custom instruments, generally centred around reproducing the Lemmy Bass though I will not re-create another of that particular design as it holds more prominence, more impact to be the only one, individual, in the World.”

Q. One of the great things to watch in previous years was how your guitars were like stars – fans and even bands lined up to be photographed with them!

“Haha yes, it is a wonderful experience to have your artwork appreciated by people that you admire as artists in their own right. I’ve had many of my inspirations pay their respects to my instruments, even so far as to commission me for something very unique for themselves. People’s first impressions always purport the truth. When you watch people’s eyes as they gaze upon your work, you instantly know their true thoughts. I was lucky enough to meet John5 of Marilyn Manson and Rob Zombie fame last year at Bloodstock in which he took time out of his schedule to congratulate and proclaim his views to me. In my experience, the bands I meet at Bloodstock have no reservations nor inhibitions when speaking their minds. Barney of Napalm Death even stated that the RAM Guitar “looks like a pretzel”. Such a funny statement; I’d never seen it like that, but now that he mentioned it, I guess he’s right! I’m looking forward to what other interesting anecdotes I hear at this year’s Bloodstock!”