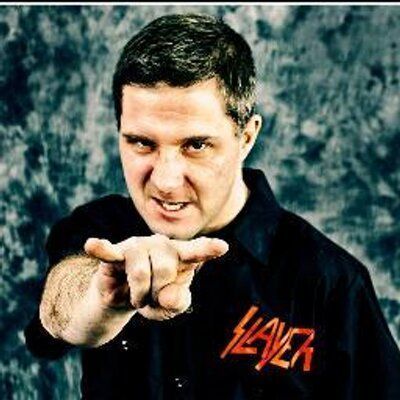 Q. How did you get into shooting live music in the first place?

“My first gig was in 1989, Gary Moore in the SFX in Dublin on the 'After the War' tour, and I just grew up with Kerrang!, Raw, and Metal Hammer and those magazines. For me, it was the likes of Thin Lizzy's 'Live and Dangerous', W.A.S.P.'s 'Live in the Raw' and Iron Maiden's 'Live After Death'... as a kid growing up and seeing the pictures on those inlays – not even the album covers – but the inlays like Chalkie Davies did on the Lizzy album, the pictures are just iconic. It made me go 'God! Imagine being in that position!' And then over the years I developed this thing sneaking into gigs, and the whole process of not knowing what you had, going to the pharmacy to get the film developed, and then two or three days later, seeing what you'd got. I started getting some cool pictures through the years and Alan Byrne, a biographer in Ireland, did a Thin Lizzy book and he used a picture of mine for it, and I thought it was mad that I could just take a picture at a gig and it would appear in something like that. So, I dilly-dallied for a while but then ten years ago I took the jump, bought a digital camera and learned how to take pictures. I just fell in love with shooting live music. Live music is everything. I do landscapes and things, but when I'm at my happiest photographing is when I'm standing there shooting music I love.”

Q. How important is that emotional connection? Do you feel your work benefits from it?

“I firmly believe that I cannot take a great photo unless I have a connection with the music on stage.  I'll give you an example. The picture's not in the exhibition this year but it was one of my contenders. Last year at Bloodstock, Kreator headlined, and I remember we had full access for the whole show which is lovely for a photographer because you can slow down and go 'Right, what do I want?' I remember talking to some of the other photographers and it was a hard shoot. You get some gigs where the lights are crazy, the control you want isn't there, and I knew Kreator is always a challenge, a good challenge. I remember one of the photographers saying to me 'Are you staying in here for all this?' I said 'I'm waiting for the flag'. They said 'What flag?' And I just screamed in the pit 'The flag of hate!' Ha ha! In the end, I waited and waited, and I got the photo, and for me it's perfect.”

Q. Tell us about the images you'll be showing in the RAM Gallery this year.

“The first one I picked is Dee Snider of Twisted Sister at Bloodstock where it looks like fire is coming out of his hands. That night was special. Twisted Sister are up there in my top five bands. I took photos of the gig and came out of the pit with tears in my eyes because it was the last ever show. Back then I wasn't working live on the pics so it was the Monday before I saw it. I was up in Scotland with my partner and when I opened the pics and saw it I was just like 'Karen! Karen! Karen! Look at this!' The image went online and within twenty minutes my computer just blew up. Within an hour people had started to really notice what I had done. That was 2016 and I'd had a good four and a half years shooting bands. But that was the first time I took an image that made people really notice. Within a year, Bloodstock had pulled me on board as one of their photographers. It was a special image for me that opened doors. In 2019 I actually gave Dee Snider a copy and I know for a fact that it's hanging on a wall in his own home.

The second one is another pyrotechnic shot and it's Gojira. It's a black and white shot from 2018. I had noticed while the pyro was going off that it was gathering over Joe on the stage in shapes. As opposed to fire just disappearing, there must have been something in the air that night so it was catching in a certain way. I was trying to catch a perfect circle of fire over Joe, and I managed to. You can hardly even see Joe in the photo, he's almost a silhouette, but when I saw it all I could think was that it was the planet on fire. Gojira are very much 'save the planet' and I could feel a connection between that moment and their whole ethos. For me, it was gold as a picture, to even equate to the magic of the band itself.”

Q. How do you feel about being part of the RAM Gallery for the first time?

“With this year's contributors the gallery is just going to be off the scale! John McMurtrie is there this year and his photographs are just sublime. Paul Gregory has just taken it up a level this year and as far as I see it I'm way down the ladder on this one. To be in that gallery alongside people like Rodney Matthews... I mean, 'On a Storyteller's Night' is just one of the greatest album covers of all time. To be sharing just a small space alongside him, to me, is spectacular. And Eliran Kantor is probably one of the best, most original album artists I've seen in years. That hand-painted textural feel is just astounding.”

Q. The emotion you've expressed about all this recalls how I like to describe Bloodstock, which is 'A state of mind'.

“I got started with Metal to the Masses which to me is the heart of the festival. I remember Simon Hall coming to me and saying 'You're the right mentality for Bloodstock, you're one of us.' For anyone to get that, that's everything to me. If I was to pick my favourite photo of all time that I've taken – and it's probably not even on my website – it was taken from up in the crow's nest where the soundboard is. There's a father and his little girl. In the middle of the Emperor show, she's in his arms and she's looking at him with her ear protectors on, and he just gives her a little kiss. To me, that's everything about Bloodstock, it's family.”