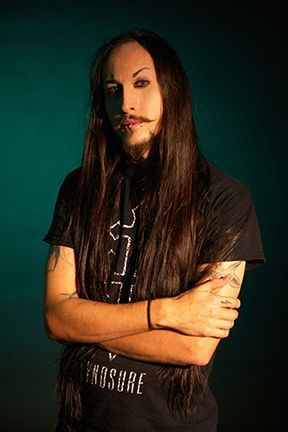 Guitar designer and maker Oliver Andrew aka Cynosure has been part of the RAM gallery every year since the inaugural exhibition at the Bloodstock festival in 2014, contributing some of the most amazing pieces featured thus far. His bass guitars inspired by Lemmy and Motörhead in particular caused a sensation both at the festival and throughout the metal world. Returning once again for 2017, he has created no less than three guitars, each an individually realised masterpiece.

Q. RAM founder Paul Raymond Gregory has once again commissioned bespoke instruments from you. There was great synergy between your respective crafts right from the start and that seems to have only become stronger over time.

“Because of my past experience with Paul, we've built up a very strong working relationship and our demographics bleed into each other very well. Obviously Paul is very recognised for his huge canvasses and fantastical artwork. My work is similar and yet completely different at the same time.  I build guitars with a surrealist twist to them, kinda like a sculpture. It's a dichotomised approach with them being an art piece and an instrument. With previous work I've done for Paul, I believe he's extremely happy with the outcome. Generally he's given me a concept and I've pretty much been given full creative liberty to turn that into a playable art piece. So to be asked again is an honour and for me very exciting to create something that I've been given an idea about. I love the process of being able to refine all the details and create something that's more than the sum of its parts.”

Q. Do you feel that creating these pieces has helped develop your skills, maybe taking your craft in new directions?

“Absolutely. Before I started building for Paul, my guitars did have a surrealist aspect but they were more simplistic in design. With Paul I believe the very first one he commissioned me to build was the RAM guitar of 2015. Essentially, he asked me to create a guitar based on his artwork for the logo for the Rock And Metal Gallery which is basically a human skull with ram's horns on it. I had no idea how to build that although of course I accepted the challenge! It took me two or three weeks to figure out how I was actually gonna do it. I didn't even really have the tools to create it. At the thickest point it was three inches which was the nose of the skull to the back, and I only had tools which allowed about two inches of wood to be cut out. So I had to figure out different ways, different methods which was fantastic because for me personally, guitar building is an alchemical process, it's experimental, and because I hadn't had any formal training and had to learn how to build guitars myself by my own means, it's much more challenging but at the same time a lot more exciting. It allows you to be more inventive with the creative process and so it's thanks to Paul that my artwork really reflects this level of intricacy and meticulousness.”

Q. You take these projects from concept to delivery in an amazingly short time period. How do you handle the pressure?

“Each year I try and outdo myself and each year I really find it exceedingly difficult. There's hardly a second that goes by when I don't think 'What am I doing?' But the pressure is constructive and I find I work best under pressure. I may not always know how to approach something but at the same time it's a learning curve and once you do it once you always retain that information. So it's difficult, but with each subsequent build you have previous methodologies in place. Everything is concurrent because while one thing's glued and drying I have to be using that time to build something else. I'm building three bodies and three necks at the same time. That's my process. Last year I finished the bass guitars with two or three days to spare; there was no time at all. It was really cutting it close. But that's the thing - with such a high degree of intricacy and detail it take a very, very long time. I would miss sleep, wake up at six in the morning and work on the guitars before I had to go to my day job, then continue with the building when I came home. But I was fuelled by the passion, and whisky obviously helped! But the drive was really who it was for and what it meant.”

Q. The photos from your workshop show some very striking blends of materials being used.

“The colour within one of the guitars is of extreme significance and so I purchased some Padauk which is extremely red, hard African wood. That's contrasted with a very white maple wood and when the two come together it's very distinctive. For one of the other guitars I used black walnut which is very strong and heavy and represents natural beauty. One of my signature things is that I like to compose a guitar with wood and metal and very dark wood works well with lighter metal, aluminium or steel. They work perfectly together.”

Q. Without giving too much away, what can you say about the guitars you're working on?

“One of the guitars is based upon an extremely well known fantasy story, one upon a very well known British heavy metal band, and one I'd rather not say anything about - I want the impact to be felt at the festival!”