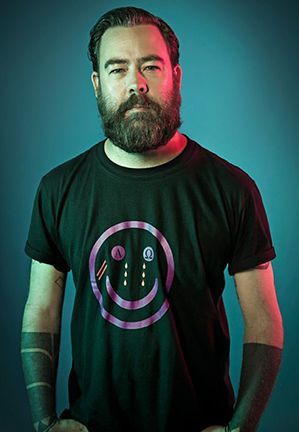 Daniel P Carter is presenter of BBC Radio 1's Rock Show and a talented artist in his own right having created album covers and merchandise designs for acts such as Behemoth, HIM and Cradle Of Filth, among many other works. He has also played in various bands including A with whom he released four albums and achieved considerable mainstream success. 2017 marks Daniel's first year exhibiting in the RAM Gallery.

Q. How did you first discover hard rock and heavy metal?

“One of my elder brothers was in the forces and when he came back on leave he'd have this cassette box full of albums. I remember going through it as a kid and I picked out three albums mainly based on the covers. The first Iron Maiden album, 'Highway to Hell' by AC/DC, and the first Motörhead album. I was like 'What is this?!' especially with the Maiden album as Derek Riggs' artwork was mind-blowing. And that was that. I was obsessed with drawing as a kid, and those covers just had an aura about them. Obviously the artwork is the first thing you notice.”

Q. Presumably this interest led directly to your later involvement with playing music?

“I started out at school, in a thrash band doing vocals. Really badly as it happens. It wasn't until a bit later when I borrowed a bass off a friend. By that point I was listening to a lot of thrash but also a lot of weird indie rock stuff and I started playing bass along to those albums. I think even if there's one style of music that defines you, like most people you do listen to other stuff, especially when you start playing. It starts to inform your playing style and makes you a better player, I think. I got into hardcore and punk, but also weirder stuff as well. The first band I was in that were signed was a straight-edge metal band signed to Roadrunner and that was long before I played in A.”

Q. Then you ended up hosting the BBC Rock Show – was it a case of getting into broadcasting because you loved the music so much you just wanted to tell other people about it? That's often the way it happens.

“Yeah, I think that's how I ended up getting the job because I never had a plan that I was gonna do radio. In bands, I was always the annoying guy going 'What are you listening to? Have you heard this? You should listen to this! It's great – check it out!' Then, in bands, if we ever did any radio stuff, I'd be asking the DJ what he was playing on the show. I'd be there to do an interview and end up telling him 'This is wicked – check it out!' Later, when they were making a shortlist for someone to present the rock show, somebody at a production company called me out of the blue and said 'Do you wanna have a go at presenting the rock show on Radio 1?' I was like 'Of course!' So I recorded a pilot show and they whittled the candidates down from there.”

Q. When did the visual art side of things enter the picture?

“At school, the two things I was obsessed with were music and art, and I was told that neither of those things were viable career paths, but I thought that at least with drawing there was a practical application for it. I thought I'd never be in a band like Metallica or Slayer, touring the world, so I focussed on drawing, did a degree, and that was the big plan. I thought the way to somehow combine the two would be to do album covers.”

Q. You mentioned choosing from your brother's cassettes based on the covers – clearly album artwork has always been important to you.

“Album covers were such an important part of discovering music back then, maybe not now, although I think the resurgence of vinyl has changed that for some people. I bought loads of albums based on their covers, although I then ended up living with some albums that I thought were shit! But some albums are great and have covers that are so primitive. Look at 'Show No Mercy' by Slayer. That album cover is sort of terrible, but it has something about it.”

Q. The vinyl resurgence you mention has really reinvigorated the realm of album artwork and packaging...

“I think people now realise that if music is available so readily for free, to get them to pay for that, you have to give them something really special. You have to give them a twelve inch square piece of art that they can pore over, that's packaged in a super-nice way. I did some stuff for Behemoth a while ago and the way they packaged it was just beautiful. Really heavy card stock and everything folded out, and there were pockets with extra inserts. It was just really nicely done and I think people are realising that some people still want a really quality product to hold.”

Q. Tell us a little about your process when it comes to creating artwork.

“A lot of the paintings I do are actually two paintings on top of each other, and this is where it gets a little weird. Because I'm interested in a lot of occult and esoteric things, I'll do an initial pass on an artwork, maybe in water colours and pencil, and maybe ink, really quick, and it'll be the size I'm going to work on. It'll contain bodies of text, visual references, sigils... all the things I think the record represents. Then I do the painting on top of that and most of what's been drawn on there before will be obscured. I believe that any type of artwork you create is a magical thing. If you make a piece of work and things are obscured beneath layers, if you've imbued them with something, they're still there, and they're still discernible whether you can actually see them or not. In the same way if somebody walks into a dark room and somebody's stood in the corner, they can sense there's something there. Another things that's weird about paintings, if you're making them with the intent of them having a magical property to them... I've started seeing recurring themes and it hasn't been a conscious decision to have them. It wasn't till I looked back that I started seeing this stuff in there and then I started researching what that might be, and I found links to different things, occult practices, which was interesting.”

Q. So, what pieces of yours can we expect to see in the Gallery at Bloodstock?

“There's the EP cover I did for Behemoth, and there's bits they used from the under-painting for an insert because I scanned that before I painted over it. There's the cover I did for Me And That Man which is Nergal from Behemoth's project. The album is called 'Songs of Love and Death' but the working title was 'Love is a Dog From Hell', which is actually the title of collected works by Charles Bukowski. What I usually do when I get a commission is ask people to send me the lyrics and the music and I just see what comes out through reading and listening. So I did a painting of Bukowski, a fairly straight portrait of him, like a giant face in the sky looking downward on a wolf, or dog, as if in night vision. Almost like the face of God looking down on this dog in a forest. I showed it to Nergal and he was super into it and it was agreed that that was the cover. But the label were a little worried that Bukowski's estate wouldn't want his likeness used without permission and then it became a can of worms and the album title was changed. So I ended up doing a portrait of my dad, scanned that, and then Photoshopped it over the original painting. But what's gonna be in the exhibition is the original painting with Bukowski's face in it. The last one is a fairly straight portrait of Lemmy which was done for Classic Rock magazine. There are lots of hidden bits and pieces layered into that one.”