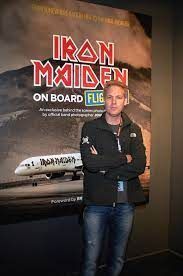 John McMurtrie is an award-winning music photographer best known for his live and studio work with rock and metal bands. He is the official photographer for Iron Maiden and author of the book 'Iron Maiden: On Board Flight 666', a behind-the-scenes photo documentary. 2021 marked his debut in the RAM Gallery and we are delighted to welcome him back in 2022 showcasing a selection of images from Maiden's 'Legacy of the Beast' tour, among others.

Q. Tell us a little about some of the prints you'll be exhibiting this year.

“It's the 'Legacy' collection, basically from the 'Legacy of the Beast' tour starting in 2018, but which had a slight pause due to the pandemic. So that's where the prints are taken from and it's a celebration of Iron Maiden through the years. It encompasses the three different stage sets the show had. It starts off with war, which has the massive Spitfire, and then it goes into religion and we've got a shot of the massive cathedral stage set and Bruce on 'The Sign of the Cross'. Then it moves into death which is kinda hell is unleashed on stage with 'The Number of the Beast' and a lot of pyros and fire. And then you've got the massive Eddie at the end of the show. So the 'Legacy' prints all revolve around those three stage sets.”

Q. Your continuing work documenting Iron Maiden on and off stage really encapsulates the band's remarkable longevity and work ethic.

“Steve is the main driving force of Iron Maiden but it becomes apparent when you see them rehearsing how much love they have for each other and how much love they have for the music. Of course Iron Maiden are famed for their stage sets and that's what I love because it makes it so photogenic. But number one is the music and the love they have for playing it, and that's a key ingredient. I think some bands get to a certain point in their career where people are only interested in them playing the greatest hits, and although the 'Legacy of the Beast' tour was in many ways a greatest hits tour, we eventually switched, playing a few songs from the new album 'Senjutsu'. I think they've kept it fresh and original, and kept themselves entertained by writing new albums and new material while always having the opportunity to grab something from their back catalogue. It's always an exciting mix when there's a new album out. They don't exactly write two-and-a-half, three-minute songs. They're all nine minutes, ten minutes, incredible prog anthems, and I think that's what keeps it interesting for them.”

Q. Maiden's decision to perform 'Senjutsu' in its entirety at selected shows is certainly a courageous move.

“I started working with them in 2006 when they did 'A Matter of Life and Death', and on that tour they played the entire album, and I loved it. It was a brave move to make and I think the pay-off was huge because by 2008 they did the 'Somewhere Back in Time' tour and we had Ed Force One. That was when they brought back 'Rime of the Ancient Mariner', bringing back those classics, but they brought with it a massive new fan base who got into 'A Matter of Life and Death'. They're constantly generating new fans and that's a key thing. They could just sit back and do the whole Mötley Crüe thing for a pay cheque, but I've never, ever seen that from Iron Maiden.”

Q. Maiden as individuals aren't particularly image driven, preferring to let the stage production and music do the talking. As a photographer, what kind of challenges does this present?

“That's the clever thing with Iron Maiden and Rod Smallwood, it's all about the content of the albums and the stage sets, that's the overriding image – Eddie and the album artwork. To be truthful, Iron Maiden don't particularly enjoy doing photo shoots. They don't do them often, not as much as I'd prefer anyway. When we do, most of the time it's documenting stuff on the road. We've done a few memorable shoots in front of Ed Force One, and some famous places around the world. They're very easy to photograph and very easy to get on with, but we sometimes do get bands where it is all about the image, and that can be a little bit difficult because you can get egos overriding, but it's a very laid back affair doing shoots with Maiden compared with someone like, say, Avenged Sevenfold.”

Q. Your latest Maiden photographs really bring home how iconic and instantly recognisable the band's artwork and imagery is.

“It has a huge presence and each album defines itself either by the album artwork or the live stage set. Non-believers don't actually get that the Iron Maiden stage sets are such a phenomenal thing. There's no LED screens, it's all hand-painted drapes, it's a full set. They do set changeovers in a minute and a half – it's phenomenal! What I love about this band is their ambition. They've never sat back on their success and said 'Well, that was amazing, but we're never gonna outdo that!' It always has to be bigger and better.”

Q. Given how long you've been working with Maiden, you must have developed quite a deep level of mutual understanding.

“There's certainly a level of trust with me as a photographer. I'll watch the production rehearsals, and Rod Smallwood as a manager, he's knows I'm gonna get it. I remember when I started there were a few briefings, and on occasions they'll brief me on stuff, but they know I'll work out what they key shots are that will capture the show. My job is to photograph the show in a way that when you see the shots you go 'Wow! I've gotta see this!'”