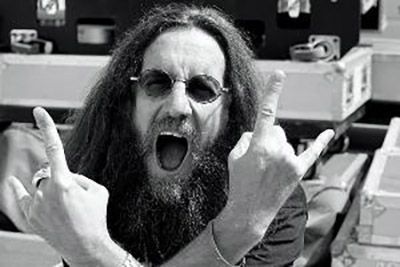 Steve 'Krusher' Joule is a rock legend. Former art director for Kerrang!, creator of many iconic album cover designs, TV and radio presenter, author, photographer, DJ and MC - most famously for Ozzfest – his life has been one of rock'n'roll excess and overdrive. His Ozzfest appearances aside, Krusher is perhaps best known for his notorious cover for Black Sabbath's 1983 album 'Born Again'. Amongst other things, 2018 marks his debut as an exhibitor at the RAM Gallery, showing a selection of some of his best-known work.

Q. Was your drive to create album covers born of your own appreciation of them?

“Yes. I always loved the twelve-inch album cover and the gatefold sleeve especially. It was just part and parcel. I mean, I'm 65 next year and I remember when you bought an album you got it home, you put it on the record player, and you'd sit there and stare at the cover. Back then they didn't have inner sleeves with the lyrics printed on, they had inner sleeves advertising other albums that were on that record label. It was a whole world investigating the cover and what's inside the cover.”

Q. Did you ever decide to buy an album based solely on the sleeve?

“Absolutely! I knew it was going to be great anyway but one of the first I did that with was Jimi Hendrix and 'Electric Ladyland' which had the cover he actually hated with all the nudes on it. It was a double album so it was a gatefold sleeve. It had loads of naked ladies on it so I bought that because I was a young, impressionable teenager!”

“That's a very good question! Obviously it's got to be arresting. Back in the day you would flick through the racks in a record shop and if you saw something that made you actually stop and investigate a little bit more then the album cover has done half of its job. The cover is there very much as a selling point for the album.”

Q. Of all the album coversand other artwork you've created over the years, what's your favourite?

“I guess it would be Ozzy's 'Diary of a Madman'. I'm very proud of that because it was my first big step up. I'd done some covers for compilation albums and a cover for Hawkwind, but Ozzy was like  taking a step up the ladder and Fin Costello, the photographer, interpreted my ideas very well. And then you have the inner sleeve with hand-written lyrics and the 'satanic scribble' which was just a scribble. There was nothing satanic about it at all although some idiot in America decided that it was the hand of Satan. I also did 'Speak of the Devil' for Ozzy and that was a monster. I don't know why but I decided that I was going to hand-letter absolutely everything. I've still got all the original hand lettering and it's like 'How the fuck did I actually manage to do this?' It was all done on a much larger scale than the actual album sleeve and on probably 30 or 40 different pieces of paper. I must have been quite together at the time in order to get all that done! Because at the time, life was pretty crazy for me, it really was.”

Q. Tell us a bit about the work you'll be showing at the RAM Gallery this year.

“First of all, there'll be the 'Born Again' print with the lettering taken off it. I've also actually made some minor changes to it, some little bits and pieces on it that I wasn't really that happy with, and I've made the colours a little more vibrant as well. Then there's the 'Happy Samhain' design which is adapted from the back cover of 'Born Again'. Those two will be on sale. I'm showing my hand lettering for 'Diary of a Madman' and 'Speak of the Devil' plus the circle that went of the back of 'Speak of the Devil' around the live picture which has some runes and more satanic scribble. I've got the original bat for 'Speak of the Devil' which was quite small but you'll see it quite large as there's actually quite a lot of detail. And, nothing to do with my artwork, but somehow I managed to have Lemmy's original lyrics from 'All the Aces' from 'Bomber'. I designed Motörhead's 'Bomber' tour programme and if I remember rightly Doug Smith their manager gave me the lyrics and asked me to try and incorporate them into the design. When I showed the final design to Doug I hadn't incorporated them but he thought it was great and never asked for the lyrics back. I'd forgotten about them but I found them about ten years ago when I was rummaging through some stuff.”

Q. Did you ever have a chance to show the lyrics to Lemmy?

“No, I didn't. Every time I saw Lemmy I never remembered that I had it! Me and Lemmy always had more interesting things to discuss. I do remember though talking to Lemmy about writing lyrics and asking him how he went about it. He said 'I come up with a title, we do the music in the studio, and when it comes to the final crunch I take a load of speed and write lyrics on the spot.' That's exactly what you can see on those lyrics. Even though they were written very shortly before he recorded them, he did change the final version before it came to singing them. I can't think of any exhibition where Lemmy's hand-written lyrics have been shown.”

Q. You've been coming to Bloodstock for many years and have MC'd many times. As an artist, what were your impressions of the RAM Gallery?

“I was incredibly impressed by it. I thought it was a brilliant idea and a very brave idea. When I first heard about it I had no idea exactly what it would be like, how it would look. Considering it's based in a marquee, Paul has done an incredible thing. It's always worth a visit and it's something different. Very different for a festival to have a gallery. And Paul's artwork is quite astounding to behold, from actual album artwork to the 'Lord of the Rings' pieces. I just stand back in awe. People think I'm an artist but when it comes down to it Paul is hands down the master.”