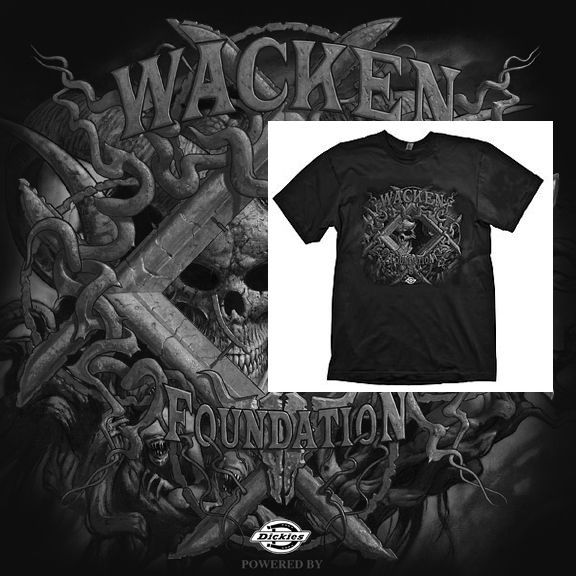 A METAL-SHIRT FOR YOUNG METAL BANDS

Metal makes it possible! Six companies are working together to support newcomer hard rock and metal bands. The new Wacken Foundationshirt is a result of this unique collaboration.

Wacken, 1st July 2015 – Many times the metal community proved how close it gets together in order to do something good. The new Wacken Foundation t-shirt is a good proof for that. It all began with a sketch by the British Artist Paul Raymond Gregory. Who became famous for designing artworks for such legends as Uriah Heep, DIO, Saxon and Motörhead. „We know Paul Raymond Gregory for years and we’ve already had a t-shirt collaboration with him back in 2013. But it is the first time that we get so many other non-metal companies involved in that project. This fact makes us proud.” – stated Lara Wilke from the Wacken Foundation

Besides us and Paul Gregory the company Dickies is taking part in the project. They sponsored 400 black T-Shirts. The Company Tank Shirts from Hohn in Schleswig-Holstein took care of the printing – which they also sponsored. Furthermore the distributor Metaltix renounced the distribution fee and the shipping will be handled by the Stiftung Mensch from Heide. Therefore all benefits of the new Wacken Foundation-Shirts are % 100 for the good cause.

60% of the generated income will benefit us in order to support hard rock and heavy metal new comer artists. The remaining 40% of the income will go to Paul Gregorys Rock- and Metal Museum. The museum will be a platform for up and coming Artists and should also be used as a concert venue for new comer bands.

The T-Shirt is limited to 400 pieces and will be available from Wednesday, 1st July 2015 in the Metaltix Merchandise online shop. It can be found at www.metaltix.com in the product category “Wacken Foundation” for the price of only € 24.90. SOLD OUT