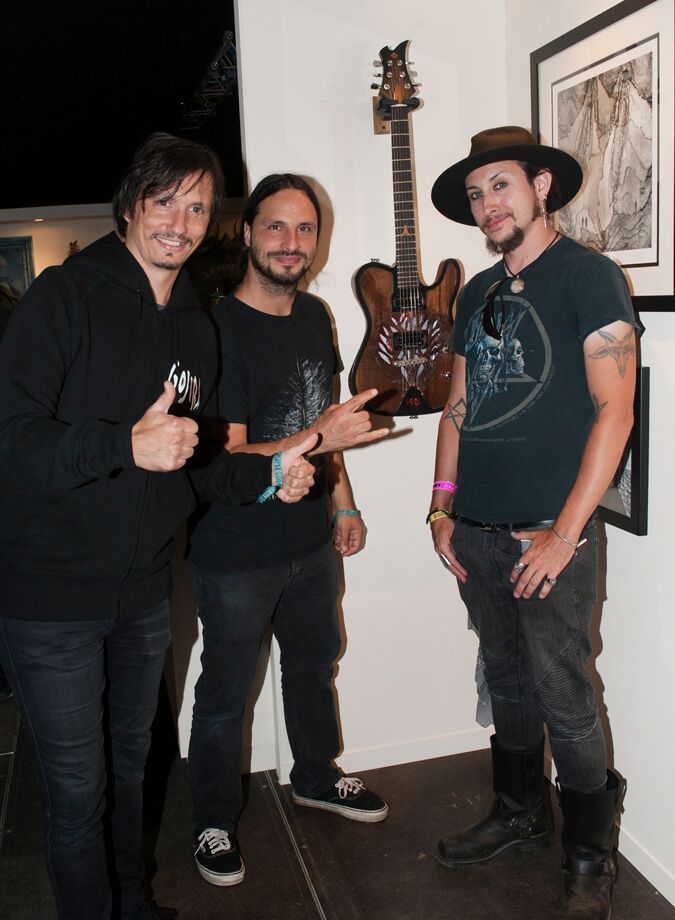 The Rock and Metal (RAM) is a creative collective operating within the Art and Entertainments sectors, and Fantasy, Rock and Heavy Metal genres.

Following the tremendous success of the exhibitions in 2014 and 2015, we are once again delighted to have the RAM Museum take its place in Bloodstock's stellar line-up of attractions.

Showcasing a selection of art and memorabilia, it expands on the previous years' exhibitions, featuring work by Bloodstock co-founder Paul Raymond Gregory, himself an acclaimed artist with an extensive body of work which includes many famous album covers and monolithic pieces inspired by the legendary tales of JRR Tolkien.

On December 28, 2015, the world of rock and metal was robbed of one its true icons with the passing of Ian 'Lemmy' Kilmister, Motörhead founder and frontman, gentleman, scholar, larger-than-life party animal, and the very embodiment of rock'n'roll. In memory of the great man, we present 'The Lemmy Wall' as a token of respect and admiration for a true pioneer and a powerhouse performer of the music that unites us all.

We are proud to present work by celebrated artist Christian Sloan Hall whose distinctive style has accompanied the soul-stirring music of Amon Amarth (including one of the band's vast stage backdrops), and graced many covers and features in the pages of Metal Hammer during the last decade.

Alongside his 'day job' drumming in Gojira, Mario Duplantier has spent much of his life drawing and painting, gaining particular inspiration from his travels with the band. Ink, old paintings, and even garbage are just some of the media he employs, and we're pleased to include some of his abstract, surrealistic work in this year's selection.

RAM regular Oliver Andrew of Cynosure Guitars makes a welcome return, with custom, specially-commissioned pieces which showcase his outstanding skills as an instrument imagineer. These guitars are set to become future classics.

Emphasizing the links between music, imagery and the written word, the exhibition once again features the work of photographers and authors. New for 2016 are works by Lariyah Hayes ('Darkadya – The Book of Art From Below') and Peter Nahum (Image Thief photography), while returning from 2015 are Ramon Martos with his book 'And Justice For Art – Stories About Heavy Metal Album Covers', and Alison Richards of OATH Photography.

As part of the many exciting developments planned for the coming months we are also pleased to announce the RAMMPIT-UP initiative, an undergraduate programme operating in partnership with select universities to encourage the development of up and coming photographers who can gain valuable experience capturing and documenting the dynamic worlds of the festival environment.

Professionally hung and lit and housed in a specially constructed space, the RAM Museum 2016 marks another important step in the goal of establishing a new permanent rock venue, with Paul Raymond Gregory returning to his roots as an artist and gallery owner in support of both art and music. The proposed venue would include a live music space with bar, rehearsal and recording facilities, and a permanent exhibition space. A vital hub for British rock and metal in the heart of the Midlands, the TRUE birthplace of metal.